The newest island on Poptropica is called Mystery Train Island. It was released to paid members on September 9, 2011. In Mystery Train Island, you’re on board a train headed for the 1893 World’s Fair in Chicago. There are several celebrity travelers on board the train, including Mark Twain, Thomas Edison, Gustav Eiffel and more. Early on, someone will steal a new invention created by Thomas Edison. It’s up to you to find out who did it and clear your own name in the process! Along the way there are plenty of secrets, puzzles and cheats for Mystery Train Island.

The full video walkthrough for Mystery Train Island is now complete. Take a look and you’ll find everything you need to beat Mystery Train Island. Remember, if you like the videos, please give them a Thumbs Up on Youtube and subscribe to my channel. Thank you for watching!

Prefer a written walkthrough for Mystery Train Island? Here’s a step-by-step guide that will show you exactly how to win. 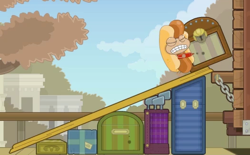 Pushing the luggage up the completed ramp in Mystery Train Island.

On Board the Train 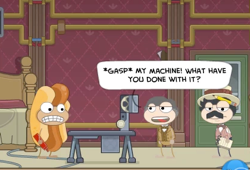 Don't look at the hot dog guy. He didn't steal it!

What do you think about the newest island? Fire away in the comments section below, or join the discussion in the Poptropica Secrets Forum!

Done with Mystery Train?
Looking for something fun to do? Play the Where is Dr. Hare? guessing game. Dr. Hare is hiding out all over Poptropica. By looking at a few screenshots, can you guess where he is? How well do you know Poptropica. Play the game now!