Red Dragon Island is a brand-new Poptropica quest that takes place in ancient Japan. It was released to paid members in early access on May 5, 2011. The island features the main characters from the Magic Tree House book series. In this adventure, you travel back in time in the magic tree house with them to help save a village from the rule of a mean and terrible shogun.

Here is the full video walkthrough for this quest. Follow the video and you’ll see step-by-step how to beat Red Dragon Island on Poptropica.

Once you arrive on Red Dragon Island, run to the right until you see a tire swing in the background. Place your mouse cursor over the tire swing and click when it says, ENTER. You’ll see a short animation of sparkles going past the roof of a house and then you’ll see Jack and Annie (the characters from the Magic Tree House books) head to the tree house. Walk over to the right until you get to the tire swing. Click on the rope to cut it and make the tire drop to the ground. Now push the tire to make it roll along the ground. Keep pushing it while heading to the left of the screen. Push the tire through town and head to the next area to the left. Then push the tire over the hills all the way to the far left until it’s underneath the wooden ladder heading up the tree.

You’ll see a pair of red glasses on the ground. Pick them up. Once you have them, jump up on top of the tire to get a nice bounce and then land up in the tree house or on the ladder. Climb up and enter the tree house. Inside you’ll find Jack and Annie. Click on the glasses in your backpack and then click on Use to give them to Jack so that he can see. Now walk over to the left and pick up the Frog Creek Pennsylvania: Home Town USA book. Next, talk to Annie and ask her how the tree house works. Then a book will appear to her right. It’s called, A Journey to Old Japan. Pick it up and then click on it in your backpack to Use it and begin the trip to ancient Japan!

The Magic Tree House will zoom off into the air. Hang on! In a few moments you’ll arrive in ancient Japan. You will all appear outside. Jack and Annie are already wearing kimonos and run off to start their adventure. I can’t believe they’re ditching you! Jack gives you a magic amulet that you can use to return to the tree house anytime. Follow them by running to the left. You’ll soon approach two samurai guards. Click on them and then they’ll arrest you for having no passport and throw you in a jail cell. Good thing we have that magic amulet! Use it to return to the tree house. Run left again, but this time the door to the Bonsai Shop will be open. Go inside and talk to the woman there. Ask her about a kimono and she will let you have one of hers. Choose whichever color you like: red, yellow or blue. When you put it on, you’ll find a passport in the pocket.

Now that you look like a citizen in your kimono and have a passport, you can walk past the guards. Go to the left to enter the next zone.

When you first arrive, Jack and Annie will be here and they look a little scared. The samurai guards have caught them without passports and take them away. Now you’ve got to rescue them!

The rest of the walkthrough with all the secrets and cheats for Red Dragon Island will be posted here shortly! You can also post a question in the Poptropica Secrets Forum if you’re having trouble with any of the specific parts of the island. Be sure to visit the Island Help section. 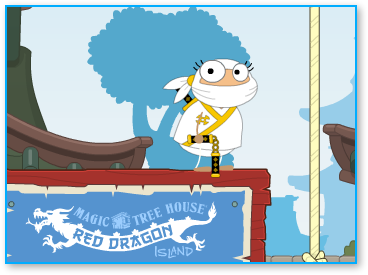 Arrival in the sneak peek edition of Red Dragon Island on Poptropica.

Before the release of the island, players were able to visit a special sneak peek edition, which featured a Sumo wrestling tournament. Players were able to compete against other players to see who could push the other out of the ring. The competition was very simple. Whomever clicked first when the referee shouts, “Begin” won the match. If you clicked too early, you were disqualified. When you got five wins, you advanced to the next rank. 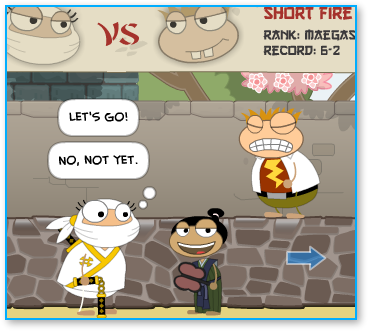 Getting ready to compete in the Sumo Wrestling competition on Red Dragon Island.

The Daily Pop section of Poptropica has been filled with sneak peeks and screenshots from the upcoming Red Dragon Island. Here’s a look at some of them. 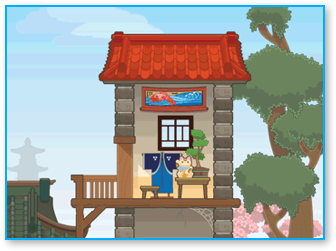 A tower in Red Dragon Island. 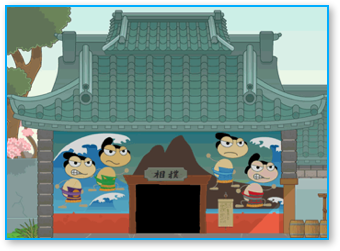 Another building from Red Dragon Island. The caption on Daily Pop says, "Welcome back to the stage of history." 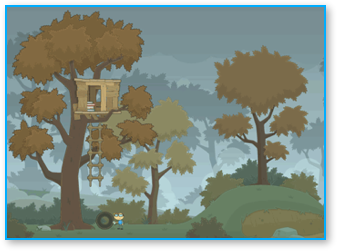 The island is brought to us by the Magic Treehouse books and here's the magic treehouse! 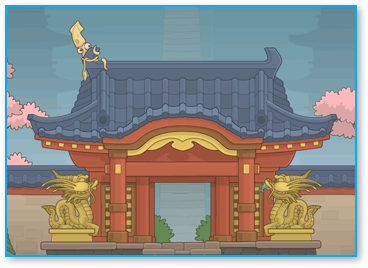 The caption for this sneak peek says, "Fish Sticks - This squid went wayward." Look in the upper-left corner of the building. 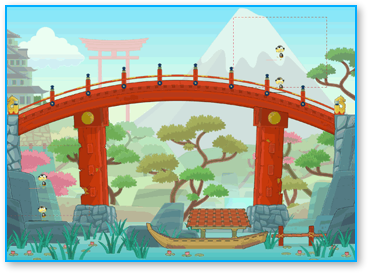 The caption for this one reads, "Arch Enemies - Bridge Over Troubled Water."