Aaar! It be official. The lucky thirteenth island for Poptropica, also known as Skullduggery Island has arrived for everyone in Poptropica to play. If yer longin’ for high seas adventure, get yerself to Poptropica now! What follows are all the tips you be needin’ to learn how to beat Skullduggery Island, find out all the cheats and secrets, and have a great time playing this new adventure.

Skullduggery Island is about pirates. You get your own ship, assemble a crew and try to build wealth through trade at different ports. You’ll also help the island get rid of a pirate nuisance, led by the dangerous and dastardly pirate, Captain Crawfish. This new island will be more complex than previous Poptropica quests and among lots of other things it will include a very cool top-down view as you travel from place to place. And to keep it interesting, you’ll have to fight other pirate ships and even sea monsters.

The adventure begins at Fort Ridley, an island in the middle of a small archipelago that has been ransacked by the notorious pirate, Captain Crawfish. When you arrive on the island, you will need to help the islanders, who are living in extreme poverty due to Crawfish’s plundering. After you help the islanders, you’ll discover the legend of a valuable treasure map. Soon, you’ll get your own ship and a small crew and set sail to find the pieces of the map and ultimately try to defeat Captain Crawfish and his crew of dastardly pirates. 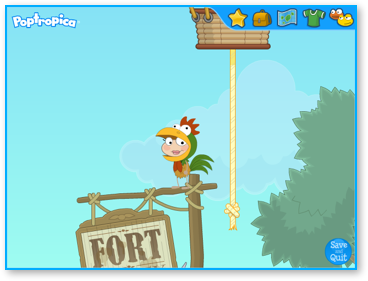 The first part of the Skullduggery Island quest is to help the people out at Fort Ridley. Here’s a video walkthrough of all the cheats and secrets for Fort Ridley. After you solve this part of the quest, you’ll get your own ship and start sailing from port to port.

Getting the Map Pieces

In part two of the video walkthrough for Skullduggery, you’ll embark on your high seas adventure. At first, it’s just you and two crew members aboard a dinky little raft. You’ll go from port to port looking for the missing pieces of the treasure map and trading goods to make more money along the way. Check out this video to see how to find the map pieces in the first four islands you visit: Bouffant Bay, Parrot Port, Golden Harbor and the dark and mysterious Pirate Cove.

Build Your Crew, Battle Captain Crawfish and Find the Treasure!

In part three of the video walkthrough, you’ll finish the map, earn doubloons to buy bigger ships and even battle Captain Crawfish. Finally, with the completed map, you’ll uncover the incredible treasure of Skullduggery Island!

Here’s a trailer that shows a preview of all the action!

While you be waiting for the brand-new island to arrive, here’s a few things to take a gander at.

Want to learn a little more? Here’s what the Poptropica Creators said in the email announcement of the island:

Embark on a new adventure to save Skullduggery Island from the wicked Captain Crawfish. Once a thriving port, the island is at the mercy of pirates who steal its goods and prevent merchants from trading there. In order to restore the island, you and your crew will have to defeat the pirates and assemble the pieces of a hidden treasure map.

Get the Poptropica Secrets Newsletter