Poptropica Game Show Island has been released, and here are all the cheats for Game Show Island with a complete walkthrough. This new adventure is a bit of a cross between Reality TV Island and Cryptids/Skullduggery. You are a human far in the future, where the robots, led by the supercomputer Holmes, have taken over. Humans now serve the robots and have no hope for the future. You first have to solve some puzzles and quests in the starting zone, and then you travel to other zones where you solve more puzzles and earn tickets to compete against robots on different game shows. The goal is to win all the game shows and restore confidence and hope to humanity so that they can rise once again and stop the robots once and for all.

Here’s the video walkthrough for the first part of the game, where you need to locate the inventor of the Holmes computer. He’ll then give you a jet that will allow you to fly around the world and compete in different game shows. Before you can compete, you need to solve a puzzle in each area to get the ticket.

If you head over to the official Game Show Island page on Poptropica, you’ll find that there’s another quick description of the new island.

Welcome to a future where robots rule. Building computers to compete on TV game shows seemed like a funny idea – until the machines wanted more. Now, after years of robotic dominance, Poptropica needs a savior. Are you clever enough to beat the robots at their own games, and restore the dignity of all Poptropicans?

Well, we knew all along it would be about Game Shows and Robots. We’ll post more information as soon as we get it. In the meantime, feel free to post here in the comments section or over in the Poptropica Secrets Forum. What do you think about the new upcoming island?

Until the island comes out, we’ll keep you updated here with all the latest news, rumors and tidbits. As you know, there have been a lot of sneak peeks posted in the Daily Pop section of Poptropica and we’ve known for a long time that the island would involve robots. It was only a few weeks ago that we saw sneak peeks with game shows, which turned out to be the name of the island.

Here’s a video collection of some of the sneak peeks that Poptropica posted for the new island.

One of the most recent screenshots in Daily Pop showed a robot statue sitting down in a pose like the famous sculpture called, The Thinker. This robot is holding a light bulb and staring at it. The caption says, Deep Thought – Putting Processing Power to Good Use. Deep Thought is also the name of a powerful supercomputer from the book, The Hitchhiker’s Guide to the Galaxy by Douglas Adams. And IBM made a very powerful chess computer that they also named Deep Thought in tribute to the computer in the book. Does Game Show Island also have a powerful robot or computer named Deep Thought, and is this a picture of it? It would make sense because the story is about how the robots were all super smart. Maybe they are controlled by a supercomputer robot. What do you think? 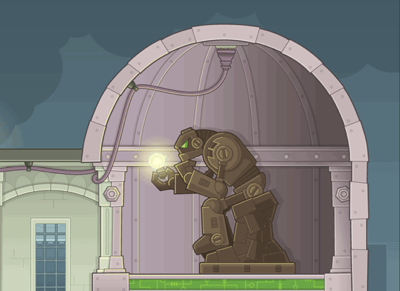 Is this robot called Deep Thought? Does it control all the robots on the island?