Spy Island is one of the most popular and entertaining quests in Poptropica. In Spy Island, you are a secret agent who is given the mission of attempting to put a halt to the notorious and evil criminal organization, B.A.D. They’re up to no good, using lasers and a satellite to zap off the hair of Poptropicans all over the island. Your goals are to locate and rescue fellow agents and infiltrate B.A.D.’s HQ to stop them from carrying out their nefarious plans.

Arrive at Spy Island by balloon and then run to the right and enter the Headquarters building. Jump up to the top until you see a guy wearing a white jacket at bow-tie. This is Director D, the head of your secret agent organization. He’ll give you a Decoder Kit.

Leave the Headquarters and run down the street to the right. Enter the Spyglass Eyewear building. Walk to the left and talk to the guy standing next to the eye chart. Ask him to give you an eye exam. When you take the exam, choose the exact opposite symbol as the one he points to. By choosing the opposites, you’re giving him the secret code letting him know you’re an agent. He’ll leave and tell you to meet him upstairs.

Go outside the exit and then jump up on the outside of the building. There is a small door in the upper left. Go inside it. Talk to the eye exam guy here and he’ll reveal that he’s the scientist for secret operations. He’ll give you a special item that he has just developed: the chameleon suit. Go ahead and put this suit on and you’ll blend into the background whenever you are standing still. Leave this room and run left through Main Street. Go to the Docks.

When you arrive at the docks, start making your way up to the top onto the roof. Avoid the guards by standing still. When you’re not moving, your chameleon suit will make you invisible and the guards cannot see you. Run across the roof until you reach a small doorway. Then go inside.

Head down through the floors in this room the same way. You can avoid the dogs whenever you stand still. When you get to the bottom-left corner of the room, you can drop down an opening into a smaller room. One of your fellow secret agents is lying on the floor, tied up with rope. Click on him to set him free. He’ll give you a laser pen, which is an ordinary looking pen that can cut through certain types of metal. He’ll also give you a satellite clue card before he runs off. Next, jump out through the hole in the roof and this time run to the right along the floor until you reach the exit. Then go through and you’ll be back out on the docks. Run back to the right to Main Street.

Run right through Main Street to Balding Avenue. Then keep going until you get to the B.A.D. Bistro. If you’re still wearing your chameleon suit, it will automatically be removed when you enter. Run through the restaurant past the B.A.D. operatives at the table and go into the kitchen. Talk to the chef and apply for the job.

When you apply, you’ll take a test where you have to remember the order of ingredients that the chef points to with his wooden spoon. After you pass the test, you’ll be hired and get a chef hat. Put it on. Then go back out to the table and talk to the B.A.D. operatives. One of them will ask you fill up his glass. He’ll give you a wine glass that has his fingerprint on it. Run back into the kitchen and then jump up above the stove into an opening in the ceiling. Leap across the lights hanging down to cross back over the restaurant area without the B.A.D. operatives seeing you leave with the glass. When you reach the end, drop back down and then leave the restaurant.

Once outside, run right until you see a guy in the bushes wearing camouflage. Talk to him and he’ll give you a folder called File X. Open up your backpack and examine the file. Slide the paper back into the file so that only one row of letters can be seen. You can now read a secret message from top to bottom that says:

Uh-oh! Could Director D be a double agent? We’ll soon find out. Continue running right to Toupee Terrace. You’ll come to a house with an alarm system on all the windows. Keep jumping up the windows and side ledges while avoiding the lights that turn on. Go all the way up ad across the house until you get to the roof. At th e very top there is a grate. Click on it and use the laser pen to cut the metal bars, then go inside.

Once inside the attic, walk to the left and you’ll find another fellow agent tied up. Click on him to release him. He’ll give you a special item: a grappling bow-tie, one of the coolest items in Poptropica. Using this tie, you can swing from building to building with ease. Kind of like Spiderman. He’ll also give you another piece of the Satellite Clues. Go back outside the attic and jump down. Then head left back to Balding Avenue.

Put on your grappling bow-tie and stand on the ledge next to the guy in camo who gave you the file. Then click on the bow-tie icon in the lower-left corner of your screen. Aim straight up. The bow-tie should catch far above and carry you up to a sign that points to the rooftop. Click it to head up there.

Jump up to the top of the roof and stand on the very edge over on the left. Click on the bow-tie again and aim at about a 30 degree angle to the left. The bow-tie should attach to the radio tower with red lights on it. You’ll jump all the way to it. It can be tricky to land on it cleanly, so if you miss, just keep using your bow-tie to get yourself to the very top of the radio tower. Once there, aim your bow-tie out to the right at about a 20 degree angle and you should end up on another glass rooftop. There’s a metal air vent up here. Click on it to go inside.

Now you’re in a big greenhouse. Run to the far right, where you’ll see a cherry bomb tree with a large cherry bomb growing in it. Click on the cherry bomb to make it drop. The fuse starts, so quickly push it to the left onto the top of the plant nearby. This is a spring plant and it will shoot the cherry up onto the platform above. Use your bow-tie to jump up there as well. Push the cherry bomb again to the left until it drops down. Then push it on the next plant and follow it up. Now push it in front of the door to a cage where another fellow agent is being held captive. Wait for the bomb to explode and destroy the door then click on the agent inside. She’ll give you some ultra vision goggles and the remaining piece of the satellite clues. Then she takes off.

Put on the ultra vision goggles and then drop down to the left and exit the greenhouse. Jump down and off to the right until you land on the ground in Balding Avenue. Head right again to Toupee Terrace and run past the house with the security alarms. Go all the way to the right through a hole in a fence with a sign saying that it’s the B.A.D. control center.

This area has a series of lasers that you need to avoid by timing your moves across. First go all the way to the right and then go up the slanted side of the building. You’ll get to a moving platform, jump on it and then go to the left onto another platform that goes from left to right. This part is kind of tricky. Jump again to another up/down platform on the left and then up to the platform above. There’s a door there with a fingerprint scanner. Since you have the wine glass with the fingerprint on it, you’ll use that to sneak inside.

Jump up while avoiding the lasers until you get to a platform with computers. You’ll get trapped inside a cage and then Director D will come out and save you. He’ll ask you to get the teleporter working. Use the satellite clues and place each clue on top of each other. They’ll spell out a code: LASER HAIR REMOVAL. Enter those three words once by one into the computer. The teleporter will turn on and then Director D will step inside. Follow him through the teleporter.

Director D will reveal two things: one, he’s wearing a toupee and two, he’s behind the B.A.D. organization. He’s a double-agent after all! He’s got control of his satellite back and plans to vaporize the hair off everyone in Poptropica. He’ll step inside his rocket and then some mini-bot robots will appear out of the wall.

Now it’s time to test your bow-tie grappling hook skills to the max! Your goal is to lure the mini-bots into the gold power speheres located around the room. The first two are really easy because they’re on the ground. The next two are tough, because they’re up high. The goal is to place yourself on the opposite side of the sphere from the mini-bot. It will go on a straight line to get you but electrocute itself when it hits the sphere. When all the mini-bots are destroyed, Director D comes after you in his rocket satellite thing. Using the same technique, try to get him to smash his ship into the ceiling several times while avoiding him. Once he smashes up his ship, he’ll surrender and be put in prison. You’ve finished the island and won the medallion. Congratulations!

Note: some people are saying that this glitch with Director D does not happen for them and that he only appears in the cage. It might just be a random thing.

Wow, you read this far? Good for you. You get a nice reward. Did you know there’s a story line glitch in Spy Island? If you finish the island and then return to Headquarters you can meet and talk with all the agents that you freed, as well as the secretary of the agency (the guy who gives you the island medallion). But if you go all the way to the top of the HQ, guess who’s still standing there? That’s right, Director D! The Poptropica Creators forgot to remove him from HQ after he reveals he’s actually a double agent and the mastermind behind the B.A.D. plot. 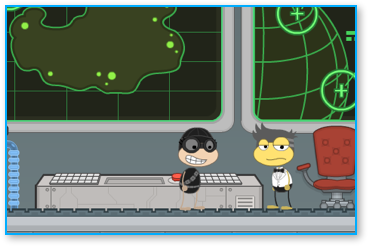