The first thing to do is go to Super Power island. When you arrive, just walk a bit to the right and go inside the Comic Shop. You’ll see a geeky looking guy on the right-hand side of the shop with pimples and wearing big black-rim glasses. Talk to him and ask him if he has anything other than comic books. He will give you a book called The Superhero’s Handbook that he wrote. You can read the book in your inventory. It’s a pretty funny book.

Leave the comic shop and go to the next store on the right, the Masks and Capes shop. Go to the guy to the left holding the scissors. He will give you a Super Hero ID card which identifies you as a superhero and tracks the number of villains that you have defeated. On the other side of the shop is a row of mannequins that have different costumes on them. Click on them to pick your costume. You can mix and match pieces from all the different costumes.

Next, leave the Masks and Capes shop and walk to the left. Cross through the water and you will come to an island with a prison that has a green meteorite that smashed into it. Talk to the guard with the gray hair and moustache. He is the prison warden. Talk to him about the escaped prisoners and he will give you an item called the, Super Villain Files. You can look through these files to see all the villains that you need to capture. Then talk to the woman wearing the lab coat and she will give you anti-power handcuffs, which are designed to let you capture super-villains. Once you have those items, it’s time to capture some super-villains! Go all the way to the right until you get to a sign that says Downtown. Click on that sign to go to the next room. It’s a short one. Walk to the right and then click on the next sign and you will arrive at Main Street. Talk to the police officers standing outside of the bank and they will tell you that Copy Cat, one of the super-villains who escaped the prison, is inside.

Enter the bank and walk to the left, where Copy Cat is standing. She will make several copies of herself and each one of those copies will hide in a different spot in the bank. She will also drop a smoke grenade on the ground and you will only have about a minute until there’s too much smoke in the bank for you to breathe. You have to capture all the copies of her before there’s too much smoke in the bank. Just walk over each copy of her to make it go poof and disappear. You’ll have to jump up a little to capture all of the copies. Use the elevator on the far right to get to the upper level.

When you get to the last copy cat, you will capture her and you’ll see a newspaper announcing her capture. You’ll be sent back to the prison and you’ll see her back behind bars. If you look at your Super Hero ID card in your inventory, you’ll see that you have one sticker in your villains defeated section. Now it’s time to catch some more! 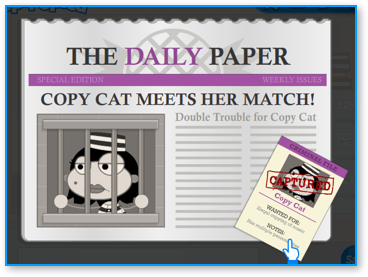 Go back to Main Street and then go all the way to the right until you get to a Subway sign. Click on the steps to go down into the Subway Station. Talk to the police officers in the Subway Station and they will tell you they need help catching Speeding Spike. Go inside the train and then walk all the way to the right, where you’ll see Speeding Spike holding a bag of money. Catching him is easy. Just keep jumping over him when he tries to hit you with the bag of money. He’ll keep moving to the left to different train cars and if you can keep getting him to miss you he’ll get so tired out that he sits down on the floor. When he does that, walk up to him to put on the handcuffs and send him back to prison. 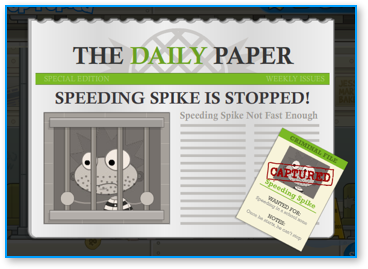 Go back all the way to the right and this time go past the Subway Station stairs to get to the City Park. When you arrive, you’ll see that Sir Rebral is standing on top of a broken statue. When you go near him, you find out that he’s controlling rocks that fly up from the ground and follow you until they hit you. You need to position yourself so that you can jump to avoid them (they’ll still follow you) and then get yourself on the other side of Sir Rebral so that the rocks hit him instead. This will make him angry and then parts of the ground will start popping up.

The next step is to find the light gray rock that you can push. Move this rock on top of one of the places where the ground pops up so that the rock will fly up into the air and hit Sir Rebral. This will knock him down and stun him so that you can walk up to him and capture him with the handcuffs. You’ll go back to the prison where you can see him safely behind bars. 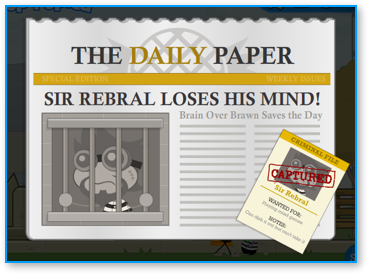 Return to the City Park and go inside the public washroom. There’s a hole next to one of the toilets. Go down the hole to get into the sewers. Walk over to the left and you will see a brown wheel. Click on it while standing on the platform underneath and the water will drain so that you move downwards. When it stops, go to the right until you get to some platforms. Jump up those and you will find another wheel. Turn it to make the water rise again partway. Swim to the left until you find another wheel and the water will rise again. Go to the left one more time and you’ll find a door that you can enter. Go through the door and Ratman will be inside. Jump up to the top right corner of the Sewer Room while avoiding the rats, and you will see a red wheel. Click on it to turn it, and it will sprinkle water over the Ratman and his flies. Ratman will be knocked out and the flies that are buzzing around him will start following you. If they touch you, you will get stung so you want to try to get to Ratman very quickly. Click on him to handcuff him and send him back to prison. 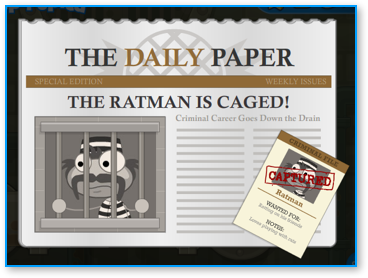 Head back to City Park and go all the way to the right. You’ll see a sign for the Junkyard. Follow that sign to go inside. When you arrive, you’ll see Crusher standing on top of a pile of junk. Talk to the police there and they’ll tell you they’re unable to capture him. Good thing you’re a Super Hero here to save the day again.

To defeat Crusher, you’re going to sneak to sneak past him twice. Head all the way to the right and get up on top of the oil barrels then leap onto the platform where he is standing and run right past him. You’ll get to a crane. Jump up the crane until you get to the cab at the top and click on it. Then drag the magnet control lever. The crane will release a heavy refrigirator which will fall on Crusher. But he lifts it off and throws it at you, knocking you back down. And now he’s really mad.

You have to sneak past Crusher one more time, but now he is hurling empty oil barrels at you and they will knock you down if you get hit. Try to get back to the crane one more time without getting hit by the oil barrels as you go. When you get all the way back to the cab of the crane, click and drag the magnet lever again to turn it back on. The magnet will pick up Crusher and then crush him flat! You can then safely go down to where he is and put the handcuffs back on him. Crusher is going back to jail! 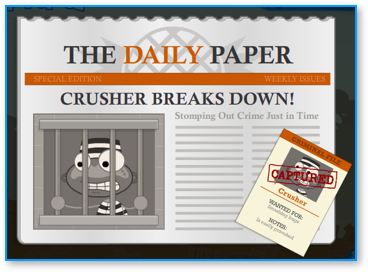 Go back to the main area and walk by the telephone booth, which will be ringing. Answer it and you’ll be given a new superpower. The ability to fly! Click on the flght icon in the lower-left corner to fly in the air.

Go to the Downtown area and fly up to the very top of the Skyscraper and then go up. You’ll see Betty Jetty standing on top of an antenna. She will taunt you and fly away. Make sure your flight power is activated and chase after her. She will throw green energy balls at you. Each time you dodge them, you’ll get a little closer to her and eventually you will be close enough to capture her. You can easily avoid the green energy balls she throws by moving off screen each time they come near you.

After you catch her, she will taunt you again, and Ned Noodlehead will appear and knock her over. Then you can put the handcuffs on her and she is captured and put back in prison. 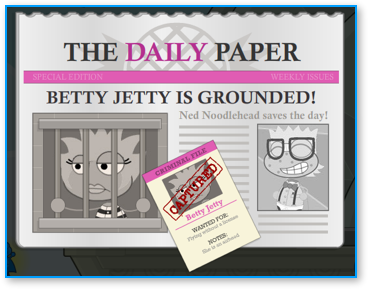 When you talk to the warden, he will say that he gave the island medallion to Ned Noodlehead for capturing Betty Jetty. You can get Ned to give it to you by first going to the hot dog vendor in City Park. Talk to the vendor and he will give you a hot dog. Then go back to the comic book shop and talk to Ned Noodlehead. He will offer to trade you the medallion for a hot dog. Do the trade and you will finish this island. Hooray! 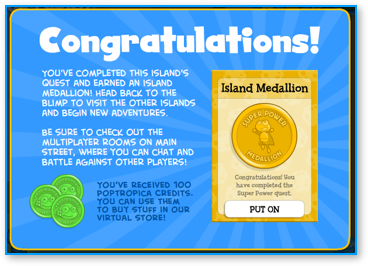 There’s an old superhero on the top of the Daily Paper building. You can get up to him after you get the flying power from the phone booth. When you click on him, he will tell you, “Remember with great power comes great responsibility.”