Time-Tangled Island is a really fun adventure on Poptropica. The basic idea is to travel to different periods of time and “fix” the future by finding different objects that have been lost and then placed in the wrong time period. You begin in the future and then can travel to different time periods using a special time travel device. You can travel through time in any order you like, but it’s probably easiest to go in order around the compass either clockwise or counter-clockwise (it doesn’t matter which direction you go.)

You will arrive on a beach. Walk to the right and there will be a building that says Party Time Tower. This is a multi-player room. To do this adventure, keep on walking. There is a crying lady standing outside of a building called, Pendulum’s Lab. Click on her and she will tell you about your mission. When she goes into the building, follow her inside.

Walk to the right until you see the lady again. Talk to her again. Now she will give you a mission printout that you can read in your items inventory. If you want to learn more about the Future Machine, talk to the man that’s wearing glasses and an apron.

To power up the Future Machine, go left and down to find the power supply. Push it together by walking towards it until it closes to activate it.

Walk back to the door of the Future Machine, which will be pulsing blue, and click on it to enter. The future will be in ruins. You will meet yourself but 50 years older in the future. Talk to future you and you will get a special time travel device that looks like a golden stopwatch. There will also be a sign in the future that says:

It wasn’t supposed to be this way! Something happened in the past that ruined mankind’s future. Can you turn back the hands of time and make things right?”

One of the hardest parts of Time Tangled island is the inside of the cave in the Viking area. When you enter the cave, you only have about 30 seconds until your torch flickers out. Since you can only see part of the way, there’s not a lot of room for error. But here’s a great cheat: the complete map of the inside of the cave. Follow this path to get down to the bottom quickly, where you’ll find the Golden Vase, which you need to return to Greek Times. 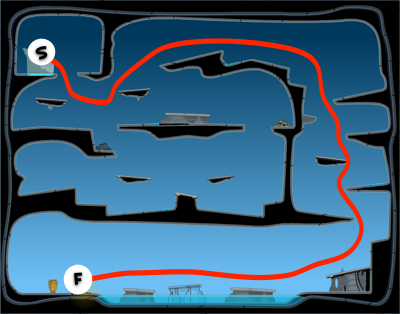 Here's the path to follow when you're inside the Viking Cave on Time Tangled Island.

The original name for the quest was Time Twisted Island.