Poptropica Mythology Island will be available for everyone to play in just a few days, and to get into the spirit, I’ve been posting some spotlight articles on some of the major characters from Greek mythology that you’ll meet on this island.

Poseidon, brother to Zeus and Hades, is ruler of the seas. When he and his two brothers defeated the Titans to rule the world, Poseidon received the seas as his kingdom and domain. He is a moody ruler and in Greek times, sailors feared his wrath in the form of storms, earthquakes and tidal waves. 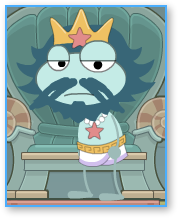 In Poptropica, Poseidon plays an important role in your quest to stop Zeus from taking over and ruling all of Poptropica. You’ll need Hercules to help you get into Poseidon’s realm, and you’ll need to swim underwater for a bit to do it. Once you get inside, you’ll talk to Poseidon, who will help you by giving you his powerful Trident, which you’ll use in the final battle with Zeus on Mount Olympus.

In Greek Mythology, Poseidon had a famous competition with his niece, Athena, over who would rule a city in Greece that they both liked. Poseidon used his trident to create a spring in the ground at the Acropolis. It was impressive, but Athena produced the olive tree, which provided food, wood and oil and was a lot more useful to the citizens. They chose Athena as their patron goddess, and the city’s name became Athens.

Back to Poptropica: you’ll get to Poseidon’s kingdom by first leaving a sacrifice at the altar in his temple. The sacrifice is a starfish and you’ll find it stuck to the face of Poseidon’s statue inside the Museum of Olympus. Take that to his temple and place it on the altar to enter his kingdom.