Poptropica Mythology Island arrives for everyone in less than a week. Paid members have been able to play it for a few weeks, and you can even get the full Mythology Walkthrough right here. One of the best things about this new island is that it has a lot of real characters and events from Greek Mythology in the island. To help celebrate the upcoming release of the island for all players, I thought I’d do a series of posts on some of the characters from Greek Mythology that you’ll meet.

Spoiler warning! I’ll try not to give any important parts of the story away with these posts but if you want all of Mythology Island to be a surprise the first time you play it, don’t read any further! 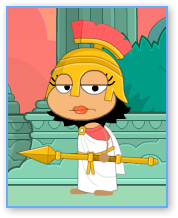 Athena at the top of Mount Olympus

You’ll first encounter Athena in Poptropica at the Tree of Immortality and she’ll be a helpful guide as you go on the main quest to locate the five items that Zeus wants you to gather. She’ll also give you help when it comes time to convince Hercules to help you out on your quest. Finally, Athena shows up at the end of your epic battle with Zeus on top of Mount Olympus and will reward you with your island completion medal.

In Greek Mythology, Athena is the goddess of wisdom, war, the arts, industry, justice, and skill (Wow, that’s a lot of stuff for one goddess!) A neat thing about Athena is that when she was born, she sprung fully-formed from Zeus’ head (that must have hurt!) Her mother was Metis, who was Zeus’ first wife. Zeus was afraid that she would give birth to a son more powerful than he was, so he swallowed her up. That’s why Athena was born out of Zeus’ head. Kind of makes sense, I guess.

Athena’s main claim to fame is that she was very fond of a special and important city in Greece. She gave the gift of an olive tree to that city, and the people of the city were so happy with the food, wood and oil it provided that they named their city after her. Thus, Athens, the greatest city in all of ancient Greece, was born.