The new Poptropica Skullduggery Pirate costume has been released to paid members in the game. This is a limited edition item and you will get it automatically when you log into the game. Just remember that you have to be a paid member and you must login before May 15 to get it. 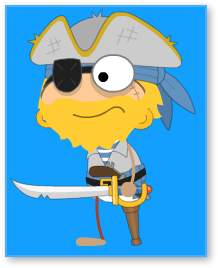 Arrr! My costume is grey. I must have used too much detergent.

The costume will appear in your backpack and is usable from any island menu when you open your backpack up. Click on the costume you use it and the familiar costumizer will appear. Highlights for the new Skullduggery Pirate outfit include a great tricorn pirate hat, an eyepatch and scar, a gold tooth, a cutlass and pistol belt, and a bandana. Boy characters even get a beard, which is really rare in Poptropica.

You can choose between four different colors for the costume, although it looks like there’s a bug when you show off your new outfit using the Poptropica Avatar Studio. The entire costume is grey! Also, when you press the spacebar, your pirate will smile and twirl the cutlass. 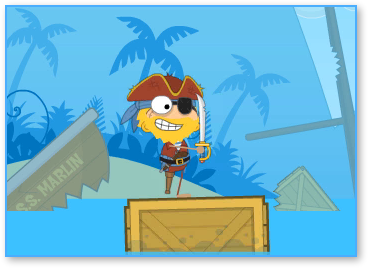 Spinning the cutlass with the new Skullduggery Pirate costume.