Poptropica has released another new island called Mission Atlantis. It is an episodic island, just like Survival Island, and the first episode is called Into the Deep. In this episode, you’ll go deep underwater to the bottom of the ocean on a mission to photograph rare fish. But at the end of the episode, something strange happens that uncovers an even deeper mystery. Click on the video above for the full video walkthrough, or read on for the written walkthrough!

When you arrive on the island, talk to the guy in black wearing a headset. He is Cam Jameson, a famous filmmaker, and he needs your help getting footage of underwater sea life for his newest film. The problem is that he can’t find the key to his submarine (the crew is keeping it from him). Your first task is to get the key so that you can unlock the sub and get some footage of those fish! 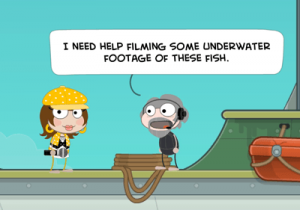 Start the island by talking with Cam.

Jump up and to the right, where you’ll see a guy with a red beard and a white helmet. If you look closely, he’s holding something in his hand. It’s the key! But if you talk to him, he won’t give it up. Jump up onto the platform above him, where you’ll see a bucket. Click on it and it will tip over, splashing water onto the guy with the red beard. You’ll also pick up the bucket and put it into your backpack. Now it’s time to jump overboard (really!) Run to the right and jump into the water. Swim over to the life raft with the Octopus in it. Click on the Octopus and he’ll spit out some black ink into your bucket. Next, go back up to the same platform where you found the bucket and then Use the bucket in your backpack. You’ll knock the bucket over again, this time spilling ink onto the guy’s head. He’ll cover his eyes and drop the key to the ground. Jump down and pick it up. Now run back to Cam and he’ll tell you to take the sub. Run to the left and click on the lock on the crate to open it, which reveals the sub. Click on the sub to get inside and begin your underwater adventure to find footage of the fish!

Head down into the ocean and you’ll soon come across a Seadragon. Cam will appear on your communicator and tell you what to do. Basically, you just need to click on the fish and then make sure you’re in front of it for a few seconds to capture the footage. This is the easiest fish to photograph–the others involve solving simple puzzles. After you get the footage of the Seadragon, head deeper down into the water to find the remaining fish. 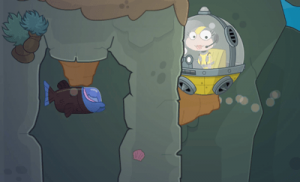 Once you arrive in the deeper area, go to the left and down a bit. You’ll see the Barreleye hiding out over on the left side of the zone. He’s resting by a vent and behind a rock wall. You need to flush him out to get your footage. First, click on the orange vent on the outside wall next to him. This will force him to swim down, where he’ll rest next to a green vent. Now click on the green one on the outside and he’ll swim to the right. Repeat this once more with the blue vent and he’ll swim up into the open, where you can click on him to get the footage you need.

The Stonefish is a shy guy who hides on the sea floor. Go up and to the right from where you got the footage of the Barreleye and then down to the very bottom where you’ll see the Stonefish. He won’t move while he can see you, so bring your sub to the left and hide behind the yellow coral there. Once you’re in place, the Stonefish will swim out from his hiding place and you can click on him to get your footage. 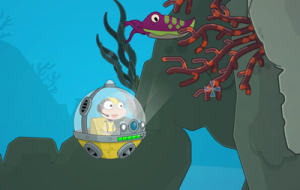 Your goal is to get the purple cuttlefish to swim into the red coral here so that you can get your footage.

Now head up and to the right and you’ll see several Cuttlefish swimming in the red and purple coral above. Your job is to get footage of the rare purple Cuttlefish. But you can’t get the footage when he’s hiding in the purple coral, as he’ll be camouflaged. Whenever you run into one of the Cuttlefish, they’ll swim away to the nearest empty coral. Use this to your advantage by navigating the fish so that the only open spot is red coral. Then push one of the purple Cuttlefish so that he has to go into the red coral, where you can click on him to get the footage you need. The red coral you are aiming for is near the top-right of the area where all the Cuttlefish are hanging out.

OK, now there’s just one more fish to photograph, and he’s in a different area. Bring your sub back to where you first spotted the Barreleye in the top-left. Follow the arrow to the left from there to enter the next zone. Here’s a funny part: to move to the next zone, you’ll temporarily exit your sub and run past the advertisement. When you arrive at the end, you’ll be in the new area back in your sub. I guess Poptropica couldn’t figure out how to keep you in your sub in the advertisement zones. When you arrive, you’ll be in a maze. The trick with the Angler Fish is to keep him feeding long enough to get the footage. The way to do this is to bring him some smaller fish to eat. As you navigate through the maze, you’ll find little red fish who will follow your sub once you move on top of them. Keep them away from the purple spiky plants along the walls, or they’ll get scared and swim away. There are six little red fish in total, but you only need to gather three or four of them. Once you have them, head over to where the Angler Fish is hiding, in the center of the maze. See this handy maze map for where to find both the Angler Fish and all six little red fish: 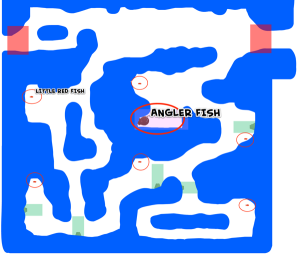 Here’s where to find the Angler Fish and the little red fish in the maze. 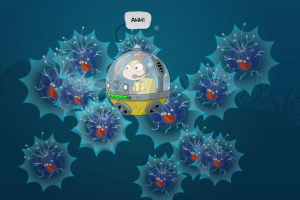 Kind of a shock to the system…

OK, you have your fish footage. Head back up to the right and run back to the previous area. Once you arrive, you’ll see a jellyfish-like thing in front of you. Cam Jameson comes back on the communicator to tell you that this is a Hydromedusa and he wants you to follow it. The Hydromedusa swims off to the right to a new area. Follow it. You’ll find yourself in deep, dark water near a ledge. Move out to the right and you’ll spot the Hydromedusa. Click on it to get the footage… …Suddenly, your surrounded by several Hydromedusae. This doesn’t look good! They all start to send out electrical shocks, which causes your submarine to overload and lose power. You sink slowly into the depths… Now go to the right, and you’ll find yourself on a ledge. The camera pans out to reveal an underwater scene with some kind of futuristic-looking shipwreck in the background. You can also spot the silhouettes of whales swimming nearby. At this point, episode one of Mission: Atlantis ends, and you’ll receive your island medallion. Exploring Atlantis itself will need to be saved for future episodes. Congratulations! So, what do you think of Episode 1 of Mission: Atlantis? Post your feedback in the comments below!

Here’s the video walkthrough for Episode 2 of Mission: Atlantis in Poptropica.

Here is the video walkthrough for Episode 3 of Mission: Atlantis in Poptropica.