Steamworks Island is getting ready to launch to the public in a few days, but the Poptropica Creators are already busy at work on the next island. Good thing, too, because back at the beginning of the year when they announced membership, they promised us lots of new islands.

They’ve been posting a few new sketches and screenshots from their work on the newest island, which still doesn’t have a name. Last week we saw early sketches of different styles of Poptropica mansions, and there was also a poll to vote on which mansion looked the best. 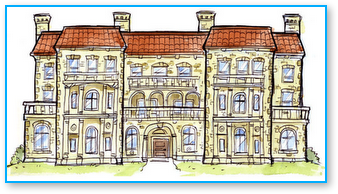 The most popular choice for the mansion in the next island.

This week, we’ve seen two new screenshots involving a jeep. One is an overhead view, similar to the navigation map from Skullduggery Island or the airplane trips from Nabooti Island. Only now there’s a jeep/SUV driving over a rugged terrain. If you look closely at the ground, you’ll see what clearly looks like dinosaur tracks on the ground. The whole thing kind of looks like Jurassic Park in a way. How cool would it be if the Creators released Dinosaur Island on Poptropica. I don’t want to get my hopes up, but that would be awesome. 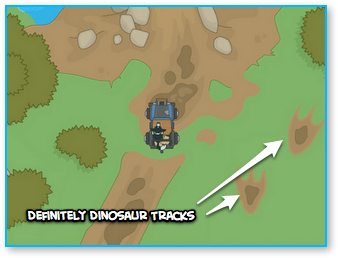 Did a Tyrannosaurus make those tracks? And why is a dog driving the jeep?

The really strange thing about this overhead view is that it kind of looks like a dog is driving the jeep. Look closely and you’ll see it. But later they posted a close-up side view that shows the jeep has a brown roof, so the dog is actually riding on top of the jeep. Still kind of strange! The second close-up side view of the jeep also clearly shows that it’s outfitted for an excursion, so we know that you’ll be driving around from place to place. You know…to see dinosaurs. 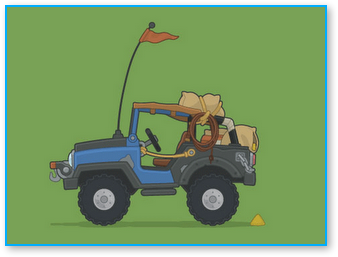 A side view of a jeep / SUV in an upcoming Poptropica island.