Everyone’s going pirate crazy this week on Poptropica with the official release of Poptropica Skullduggery Island. OK, maybe it’s just me that’s going pirate crazy, but what can I say? I love pirates. All the talk of pirates got me to thinking about the two biggest kind of toy pirate sets out there: Lego and Playmobil. I have lots of both and I know a lot of people have owned or still have some as well. So it got me thinking, which is better? Lego or Playmobil?

Let’s take a look at the different things you can get with each and then I’ll ask some Poptropicans from Skullduggery Island what they think? Have your own favorites? Take the Pirate Poll or post your thoughts in the comments section! 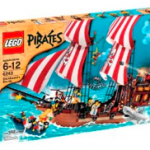 Brickbeard's Ship is a great set for Lego Pirates fans.

Man, Legos are really cool. They come in all kinds of different sets and if you’re a Lego purist, you can even just buy the simple Lego bricks and build whatever you want. Some people are totally crazy about Legos and put together some really amazing Lego buildings. But one of the best sets of Legos you can buy is without a doubt the pirates. There are a lot of different collections, which giant pirate ships, pirate islands and all kinds of stuff. Let’s look at some of my favorites.

, which costs about $140. It’s a complete pirate ship with three cannons and a removable captain’s quarters. You can even have your Lego people walk the plank. It comes with four pirates, two soldiers, the Admiral’s daughter, a monkey, a shark, and even a mermaid, so there’s all kinds of adventures you can create with this ship set. 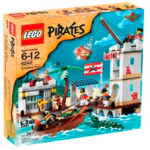 Get the Soldiers set which comes with a fortress for them to defend from the pirates.

Another great set is the LEGO Pirates Soldiers

set. It has a whole fortress that soldiers occupy and defend with a canon. It comes with both soldier and pirate figures so you can stage a battle at the fortress. There’s no ship in this set, but it does come with a rowboat and some extra figures, like a monkey and a crocodile. It’s a great companion set to the Brickbeard’s Ship set above. You can put together an awesome pirate attack.

The cool thing about Legos is that there are a lot of other sets to choose from and tons of smaller pieces that don’t cost as much. Because they’re Legos, you can mix and match them with other sets and regular bricks to create all kinds of cool pirate places to explore. If I had enough Legos and plenty of time, I’d re-create Poptropica Skullduggery Island in Legos! 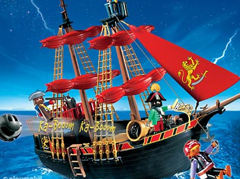 Blackbeard's Ship is a really cool pirate ship with cannons that fire.

Playmobil toys don’t allow for as much customization as Lego, because they’re fixed toys. But they are bigger and easier to pose and they usually come with some great accessories. They can get kind of expensive and take up a lot of space, but if you have enough of them you can create some really epic scenes. Of course, I love the pirate collection the best and Playmobil doesn’t disappoint when it comes to what they have in their different pirate sets. Here’s a look at some of the really cool things you can get with Playmobil to create your own huge pirate battles at sea. 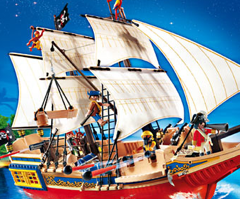 With a cabin, and a treasure area, it doesn't get any better than this ship.

The regular pirates set has lots of different pieces and the main ones are the different ships you can get, like Blackbeard’s Ship and the Large Pirate Ship. The Large Pirate ship is by far the more awesome of the two but it’s also super expensive at more than $100. There are also island sets and individual pieces that you can get. There are actually a lot of different ships available and if you have trouble finding them in the stores, just look on eBay because people sell them new and used all the time. You ca find some really good ones that they don’t sell anymore. 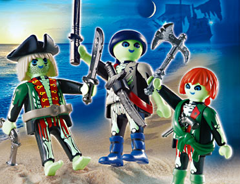 Ghost Pirates: they glow in the dark!

The ghost pirates are a little creepier but they’re kind of cool because they glow in the dark. There are also some cool sea monsters in this set, like a three headed hydra serpent (kind of like the Hydra from Poptropica Mythology Island) and a giant crab. There’s also a ghost pirate ship with tattered sails and special hiding places for the ghost pirates to “pop out” of.

Which pirate toys do you think are best? Take the Pirate Poll!