There are two new items in the Poptropica Store this week. The first is the American Football Player costume, which has arrived just in time for the Superbowl. The costume costs 75 credits, and you get an outfit featuring a helmet, reflective eye paint, a uniform, and a football. If you have the costume on, press the spacebar to toss the football up in the air. Rumor is that if you turn your costume purple like the Minnesota Vikings, then you’ll fumble the football instead. 🙂

There are four colors you can wear for the outfit: green, red, blue and purple. 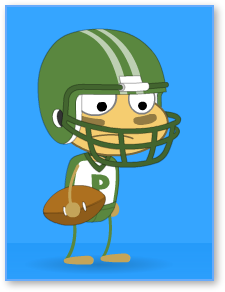