With the launch (to paid members, at least) of Twisted Thicket Island only a week away, the creators have released the long-awaited bonus items into the Store. These items are for members only and include the Lumberjerk costume, the Troll costume and the Dryad follower. All three are pretty cool. The Lumberjerk costume will only be available until the island leaves early access mode and becomes available to everyone to play. So if you’re a member or planning on becoming one, now’s the time!

Let’s take a quick look at all of these new items from the Store. 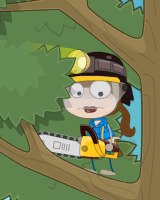 I'm a Lumberjerk and I'm OK. I work at night and I sleep all day.

Ready to cut down some trees? The Lumberjerk costume comes complete with a blue and black checkered lumberjack shirt, a helmet with protective visor and shining headlamp, a tool belt, and most impressively a vibrating chainsaw. Based on the sneak peeks from Twisted Thicket Island, it appears that there will be a construction/deforestation conflict theme. It’s not totally clear how the “Lumberjerks” fit into the story, but here’s your chance to dress up as one. There are two slightly different variations on this costume–one for girls and one for boys. It’s one of the most detailed costumes in Poptropica. There’s even puffs of smoke (cough, blech) coming out of the back of the running chainsaw. 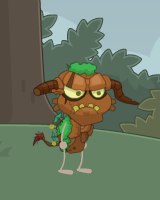 The new troll costume is a bit frightening.

The Troll factors heavily into Norse Mythology, so it’s no surprise that it’s one of the costumes in the Store to celebrate the upcoming launch of Twisted Thicket Island. The troll outfit is pretty scary as far as costumes go in Poptropica and it comes with a special power: you can temporarily turn other Poptropicans into stone. Unfortunately, it doesn’t work with the space bar. You need to load the card and click on the button each time. The effect only lasts for a few seconds. 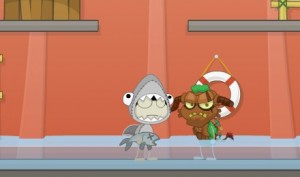 I don't know? Did it work? I can't really tell. I guess you could say that Shark Boy is stoned.

From the sneak peeks, we can tell that the Dryads will be prominent in the story of Twisted Thicket Island and if they follow the mythology, they’ll be the protectors of the forest. Epic fight between the Lumberjerks and the Dryads, perhaps? The last bonus item for members is the Dryad follower. Just like all the other follower pets in Poptropica, this cute little Dryad will fly behind you wherever you go once activated. 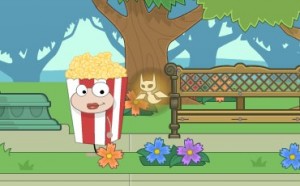 Stop following me everywhere and no, you can't eat my popcorn!

There you have it: the bonus items for Twisted Thicket Island — now available in the Store.

In unrelated news, the creators made a cryptic post late yesterday announcing something big coming today! We can’t wait to see what it is. One guess is that it has something to do with either the Poptropica Closet system or the Buddy List system that we’ve seen teasers for in the past. But who knows? We’ll find out soon!