Home | News | PoptropiCon Wallpaper – What Does it Reveal? 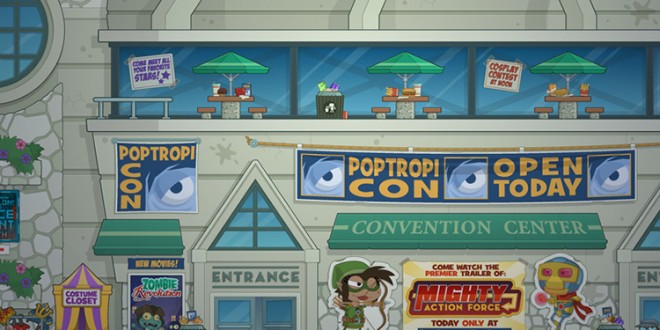 PoptropiCon Wallpaper – What Does it Reveal?

In addition to releasing some costumes and a special poster for the upcoming PoptropiCon island, the creators also put up a downloadable wallpaper on the Island Extras section of the official Island Tour page. It’s a scene from the first episode of the island, which will be called Line Forms Here. The scene shows the outside of the convention center, and since the object of the episode will be to get inside the convention and “crash the party,” my guess is that you’ll be spending a lot of time in this area, trying to figure out the way inside. Let’s look at some sections of the wallpaper to see if we can find any clues about what will happen in Episode 1 of PoptropiCon.

First, here’s the wallpaper. This is a slightly smaller version of the full image available on the official site (click on it to make it bigger). 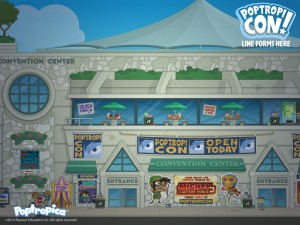 First, there’s a special premier trailer for an upcoming movie called Mighty Action Force. The banner outside shows two of the characters from the movie, Elf Archer and Gold Face. They were also featured on the printable poster announced earlier this week.

Next, if you look in the bottom left, you’ll see a little booth with a “Costume Closet” sign. Presumably this is a place where you’ll be able to try on different costumes that you can wear inside the convention. We know from the official episode description that you’ll need to put on a number of different disguises to get inside. 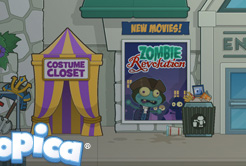 Also, doesn’t it seem  a little weird and sad that there’s only one guy outside the convention entrance? Normally the entrances to conventions are packed with people going in and out! 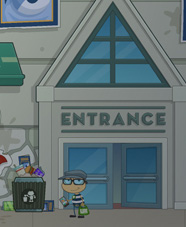