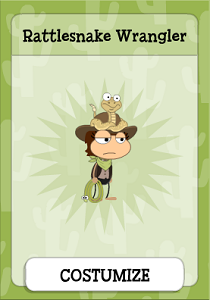 The Rattlesnake Wrangler is a rare cowboy’s outfit in Wild West island, and you can also wear it in other island in Poptropica. It includes the Rattlesnake Hat, Rattlesnake Lasso, Shirt and Pants. Wear it and you’ll be look like a real cowboy. Howdy, pard’ner!

How to Get the Rattlesnake Wrangler

Once you catch the calf, lead him to the ranch (it’s on your map) and then return to the guy in Rock Ridge.
He’ll give you an old saddle as a reward. He’ll also ask you for another favor, which is to capture five cows that have wandered off. This is how you get the rare Rattlesnake Wrangler outfit. 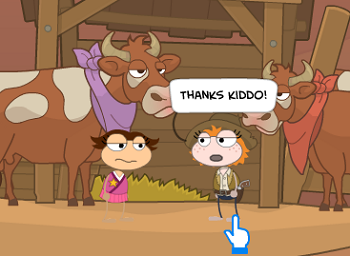 After you find the missing calf, the man will ask you again to find the other 5 calf, once you found them, he'll give you Rattlesnake Wrangler