Canyon Defense is a game that appeared on Poptropica as part of the launch of Daily Pop. It is an old favorite from MiniClip. It is a typical Tower Defense style game, where enemies attack you in waves and you must stop them from making it through your base by placing weapons throughout the map. Canyon Defense is a little different from many other games in the category in that the weapons you place cannot be upgraded. But you can earn special powers, and the game makes use of support buildings to make the game challenging and different.

When you start the game, you can choose between three different maps and three different difficulty levels. It’s best to start playing at the easy level to get a feel for the game, and then move to the harder levels, which offer more waves of attack and higher score potential.

When starting out, it’s best to put all of your missile turrets together where they will quickly take out enemies. This is especially important when you start fighting self-repairing enemies. A good starting technique is to put three missile turrets close together near the beginning of the map and then one turret about a third of the way through to catch any enemies that sneak through your initial defense. 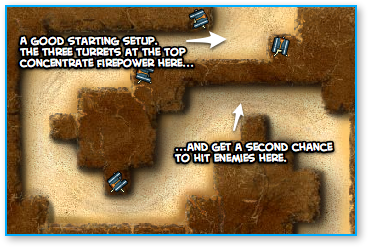 A simple setup for the beginning of the game. Concentrate that firepower!

Starting at about the 6th wave, you’ll be attacked by airplanes. They cannot be shot down with missile turrets, so you’ll need to use the anti-aircraft guns, which cost 150 coins and can be purchased from your advanced tab. Airplanes arrive at the top of the screen and fly to the bottom, To start, place one anti-aircraft battery in the center of the map and then over time spread more out to cover the whole width of the screen.

There are a lot of special support buildings in the game, such as the Nuclear Silo and the Wall Factory. You’ll need to complete certain achievements to unlock each building. For example, to get the Wall Factory, you must first construct 15 different structures. Some of these buildings have special attacks that recharge on timers and can be very useful when you’re overwhelmed with a tough wave of attacks.