PoptropiCon is the newest island in Poptropica, released on August 28, 2014. The new island will be delivered in episodic format, just like Survival Island and Mission: Atlantis. The first episode is called, Line Forms Here.

Everyone is dressed up for the biggest sci-fi and fantasy convention in Poptropica. At PoptropiCon, the most important thing isn’t what you do — it’s how you look doing it!

How do You Finish PoptropiCon Island?

Here’s the complete video walkthrough for PoptropiCon Island, Episode 1. Scroll down for the written walkthrough of the island.

When you arrive at the island by blimp, you’ll be outside the convention. Your goal is to get inside. There’s a line of people here waiting to get in. Speak with the girl dressed up as a princess at the back of the line. She’s holding an extra ticket for her friend who is dressed in a wizard costume. She’ll describe the costume and show you a “selfie” of her and her friend so you know what it looks like. Your job is to use the Costumizer feature to put together a wizard costume and trick this girl into giving you the ticket.

There are four pieces of the costume that you need to get. They are:

You can get the Wooden Staff from the guy at the back of this line in the blue top hat. Click on the Costumizer and then click on his staff to copy it for yourself. The next two pieces, the White Beard and the Pointed Dark Hat, are also both in this area. Jump up onto the building and Costumize the guy who is having trouble with the soda machine to get the White Beard. Then jump up again onto the roof and you’ll find a witch up here. Costumize her to get the Pointed Dark Hat.

Next, run to the next zone on the left. Run past the Forge of Finery and the Space Jaunt booths and you’ll find a guy sitting down at the pizza tables eating. He’s wearing the Robe with Moon Amulet that you need. Costumize him to get this final piece of the Wizard’s Costume and then return to the Princess girl in line.

Here are the four people you need to Costumize to complete the Wizard Costume.

When you speak with her you’ll find that she wanted something in return for the ticket. But you don’t know what that is, exactly. Now it’s time to find her real Wizard friend. Run left through the next two zones, where you’ll find the line for the restrooms. The wizard is standing at the end of the line. Click on him to talk and he’ll tell you that he left the thing he was holding for his friend in the bathroom–and that the line is too long to wait to get back in. He’ll leave the convention and now if you can get inside that bathroom, you’ll be able to retrieve the item.

The problem is that you can’t cut the line. So you need to start swapping places with the people in line to move forward. Each one of them has a task for you to perform. Start with the girl wearing the viking helmet at the back of the line. She’ll trade places with you if you can help her remember who played Thor in the Viking movie.

The answer lies to the East! Run right, all the way back to the starting zone and then further right to the end of the area. When you see the sign for the Alley, click on the open space in the chain link fence to enter that zone. Then run right until you find the security guard standing next to a giant catapult. There’s a peeling sign on the wall here that says “Bucky Lucas is Thor.” Click on the sign (you have to click on it). You’ll say, “Bucky Lucas as the Norse God of Thunder? Sounds like a hit!” and your game will be saved.

BTW, it’s great to see that Bucky Lucas (of Reality TV Island fame) is back in action!

Now run all the way back to the bathroom line and speak with the girl in the viking helmet. She’ll thank you and give you her place in line, after mentioning that she thought it was Kirk Strayer (the movie star from Back Lot Island) who played Thor.

Now click on the other girl in a Viking costume. She’ll offer to trade her place in line if you can tell her what time the Cosplay contest is. Don’t any of these people read the conference program? Run back to the starting zone and jump up onto the next level of the convention center (the same one where the guy with the soda machine was). There’s a sign here that says, “Cosplay Contest at Noon.” Click on the sign and your game will save.

Run back to the girl in line and click on her. She’ll thank you and give you her spot in line.

Now click on the guy in the green and yellow superhero costume. He’ll say that he will only give up his place for the one that wields the power amulet. Huh? OK, I guess he’s staying in character! He’ll tell you that the Cheetah Bandit has it. You’ll find her standing on top of the bus in the starting zone.

When you locate the Cheetah Bandit, click on her and she’ll tell you that you must earn the amulet. Accept her challenge to begin a short mini-game race up to the top of the building. Here’s the thing: she gets a head start (what a Cheetah!) and is impossible to beat unless you take a shortcut yourself. Use the drainpipe on the left of the building to quickly catch up to her. Even with this shortcut, you’ll need to move very quickly to beat her to the top of the water tower.

When you beat her, she’ll give you the Power Amulet. Equip it and return to the superhero guy in the bathroom line, who will be more than happy to trade places with you.

We’re slowly getting to the front of the line! Now click on the guy dressed in the space costume. He wants a Fremulon Mask from the Space Booth. Talk with the people in the booth. One gives you a pamphlet of handy Fremulon phrases. The guy on the right will offer to give you the mask, but only if you can carry on a conversation in Fremulon! You can refer to the pamphlet for what to say, or just remember these three phrases, in order:

Provide those answers and he’ll give you the Fremulon Mask. Now return to the guy in line and Use the mask in your backpack to trade with him.

There’s one more person between you and the bathroom. This girl, wearing an outfit inspired by Steamworks Island, wants you to replace her busted jetpack. She gives you some instructions on how to build one. You’ll need to collect three parts that are hidden around the island and then assemble everything at the Forge of Finery in the Parking Lot area.

Collect these three parts and then return to the Forge of Finery. Follow the instructions to assemble everything in the correct order and you’ll get a working Jetpack to trade. Return to the girl in line and Use the jetpack to trade with her. She’ll fly off and now you’re first in line.

The complete Thor Costume for PoptropiCon.

Go inside the bathroom and you’ll emerge with Mjolnir, Thor’s mighty hammer! Now take this impressive hammer all the way back to the alley and use it in front of the security guard in front of the catapult. He’ll comment on how it is impressive, but mention that only Thor himself could move him away from his spot. Time to use our Costumizer powers once more! Take a look at the picture of Thor on the wall behind you–that’s the costume we need to create. Here is where you’ll find the pieces:

Costumize those pieces and then return to the security guard. He’ll think you are Thor and after you command him to leave his post he’ll disappear. Now jump onto the catapult basket several times to make it lower into position. Then click on the switch to launch yourself into the air. You will exclaim, “For Glory!” and then zoom into the air, finally crashing through the window and into the convention hall. This is the end of Episode 1, and you’ll receive your medallion!

Now wait a second–you get in through the window??? Wouldn’t it have been a lot easier to just jump up on the roof and enter the window from there? Oh well–I guess we’ll just have to wait to see what’s in store for us with Episode 2. 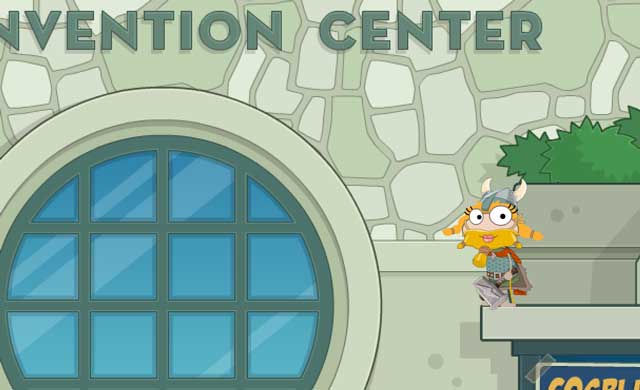 After all that work, we end up simply smashing through the window.

Here are some of the sneak peeks and screenshots that the Poptropica Creators provided before PoptropiCon was officially released: