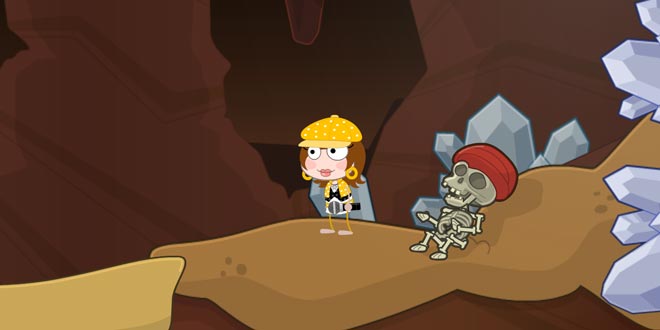 Poptropica Arabian Nights Episode 1, called How Bazaar, has been released for paid members in Poptropica! Captain Crawfish from the Poptropica blog has created an “official” video walkthrough for episode 1, which you can watch right here:

Run to the left and talk to the guy with the beard and green hat with a purple feather sticking in it. He’ll complain about the Sultan holed up in his castle while the people are terrorized by the 40 thieves.

Click on any of the merchants here and they’ll offer to trade … but you have nothing to trade. Let’s go find something valuable!

Head right to the next zone and you’ll find a guy in a red fez. Talk to him and he’ll tell you about the 40 Thieves, including an important clue about how they’ll steal anything that’s placed on the stone dias behind him.

Run right past the oasis and into the next zone.

You’ll see some signs that read DANGER and KEEP OUT!. Jump up onto the ledges above these signs and keep moving right and up.

When you get to the top, you’ll see an area of different-colored sand. When you walk over it, you’ll drop down into the cave entrance.

Walk right past the mine cart to enter the cavern.

Push the first crate on the right all the way over to the right side and then jump on it so that you can reach the ledge above.

Drop down and go to the right. Push the next crate off the ledge to the left.

Now push that same crate to the left again so that you can use it to reach the ledge above.

There’s another crate here to the left. Push it off the ledge and then push it left until it’s under the large broken wooden ladder.

Use the crate to jump up onto the ladder and then go up to the platform.

There’s another crate here. Push it off the ledge to the right. Then drop down and push it right some more so that you can use it to reach another ledge above you.

Jump up and walk to the right. You’ll see another patch of colored sand. Jump over this patch and then jump over the second patch behind it. You’ll see a skeleton with a red turban among some crystals. Click on the skeleton to retrieve some Salt.

Head back out the way you came to leave the cavern and return to town. Find the merchant with the blue and green turban and trade him Salt for Grain.

Head right to the merchant with the blue veil and trade her Grain for the Lamp.

Return to the first merchant and trade with him once more: Salt for Grain.

Go down to the merchant with the camel and trade him Grain for Cloth.

Go back up to the first merchant with the blue and green turban and trade him the Cloth for the Spy Glass.

Go to the right and climb to the top of the tower. Use the Spy Glass on the Tripod and you’ll be able to see the guy in the red fez next to the stone dias.

Jump off the tower and go to the right, up to the dias. Use your Salt to place it on top.

Return to the top of the tower and click on the Spy Glass to look through it again.

Click the view to move it up and to the left. You’ll see several thieves cloaked in black approach the dias. They’ll leave something behind.

Go back to the dias to retrieve the object: it’s a Smoke Bomb! Equip it.

Now head all the way left to the Sultan’s palace. Jump up onto the red ledges and stand above the guards. They’ll talk to each other for a while.

One of them will walk over to the other to show him something. When they’re standing together, press the space bar to throw the smoke bomb on top of them.

While they’re covered in smoke, drop down and enter the palace.

Speak with the Sultan. He’ll tell you that the Forty Thieves ransacked his palace and left him with nothing. He also tells you that the thieves stole a precious lamp and promises you a fabulous reward if you can retrieve it for him. He’ll give you his Crown Jewel to help you trade for something that will let you find the lamp.

Return to the merchants and trade with the merchant with the green and blue turban. Give him the Crown Jewel for his Ivory Camel statue.

Go down and trade with the merchant with the live camel. He’ll trade you the real camel for the Ivory one. He gives you a Camel Bridle.

Use the bridle and slowly walk the Camel to the right. Go to the stone dias and put the camel on it.

Return to the tower and peek through the Spy Glass once more.

You’ll see one of the thieves approach and try to take the camel. Eventually the camel follows him, revealing the secret hideout. It’s inside the oasis!

Go to the Oasis and by saying “Open Sesame” the entrace will open. You’ll get the island medallion for completing Episode One of Arabian Nights!

Arabian Nights was the theme chosen by the winner of Poptropcia’s Create Your Dream Island contest. The contest was won by Sarah S. from South Carolina, otherwise known to Poptropicans as Magic Eagle.

If you’re not familiar with the story of the Arabian Nights, it’s a very popular collection of tales that date back to ancient times and are primarily West and South Asian folktales, compiled in Arabic sometime during the Islamic Golden Age, which lasted from the 8th through the 13th Century. The tales were originally known as One Thousand and One Nights, but were translated into English in the 18th Century with the title, Arabian Nights. The stories themselves are woven together by Scheherazade, the bride of the King. She is to be executed but manages to keep the King entertained by her stories, and so tells him stories for 1,001 nights. She is eventually pardoned by the King and her life is saved. I guess it’s a good thing to be long-winded!

Behind the Scenes of Arabian Nights

Thanks to some great detective work by Nameless UnDEFiNed, there’s now a behind the scenes sneak peek of Arabian Nights Island. Check it out!