The new sneak preview of Red Dragon Island lets you compete in a series of Sumo Wrestling matches against opponents. The more matches you win, the more ranks you can earn. Each new rank rewards you with a special new costume for that rank. There are four different costumes that you can earn, and you’ll get a new rank and costume after every five wins.

Fortunately, winning your matches is very, very easy to do. Your opponents aren’t really other people. They’re random computer-controlled opponents and they’re not very quick. The aim of this game is very simple. You just need to click your mouse immediately after the Gyoji (the referee) says, “Begin!” Just don’t click before he says that or you’ll be disqualified. If you click quickly enough, your character will push the opponent out of the sumo ring and you’ll be the winner!

The sequence of events for the referee is that he says:

The trick is that sometimes he says, “Begin!” right away and sometimes he waits several seconds. You just have to watch carefully and then click your mouse as soon as he says it.

Here are the different ranks you will earn each time you get five wins. 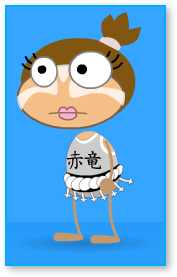 The Yokozuna Outfit is a reward for achieving the highest rank.