Shuffleboard is one of the easier games to win in Reality TV Island on Poptropica. In this simple game, each contestant gets three turns to get their puck as close to the center of the rings as they can. At the end of everyone’s turns, the puck that is closest to the very middle wins. You’ve got one huge advantage when playing this game, and that is you always get to go last! So it’s all about setting yourself up for that last shot into the middle.

When you first play, you’ll need to wait for all the other players to make their move. Then, on your turn, click and drag the mouse cursor in the direction that you want to aim the puck. Click and hold your cursor farther from the puck to make the directional arrow grow longer, resulting in a more powerful hit. Keep the arrow short for a quick little shot that only moves the puck a small distance.

There are two basic strategies for Shuffleboard on Poptropica and both work well. The first is to just stay off to the side of the board for the first two shots so that you’re not in the way of anyone else and then use your last move advantage to sneak in and win. The other strategy is to get into the center first and try to stay there. There’s a great way to use a bank shot on your first move to land almost exactly in the middle on your very first shot (as long as none of the other players are blocking the path). To do it, stretch the directional arrow as far as possible and aim just like in the screenshot below: 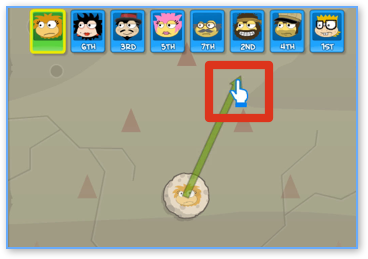 Use this bank shot on your opening move to land exactly in the middle.