A lot of people have been leaving comments about the final battle in Poptropica Steamworks Island where you must defeat three plant bosses. It’s a very tough boss fight, especially with the last one. Although I covered the boss battle in the complete Steamworks Island walkthrough, I thought I’d put together a more detailed guide for this part since so many people are having trouble with these bosses. I also updated the full Steamworks walkthrough with this information.

The basic moves you need to remember are these: move into position, duck, wait, shoot. Or if you want something easy to remember, stop, drop, and pop. By moving into position, I mean getting close enough to the boss monster that it starts to move its head and gets ready to attack. Next duck down and then wait until he attacks and his head goes back. He’ll be vulnerable for a second or two, so then you just blast him until you see him go Splat! Each boss needs to be hit like this three times. The first boss is easy, but the second and third boss have defenses that you need to take care of while attacking.

Battling the plant monsters is as easy as: stop, drop and pop.

This video goes into great detail on how to do everything in this final battle. If you have trouble with the video, keep on reading below for the written guide.

The first boss is easy-peasy. Here’s a chance to practice the basic moves that you’ll need to have down to beat the second and third bosses. Just remember the following.

Hit the boss three times to make him go Splat for good and disappear. Then quickly move on to boss number two. 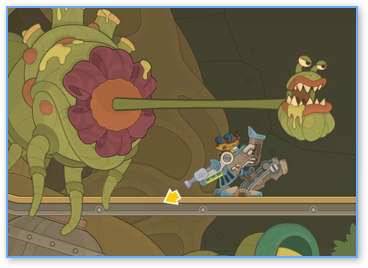 Duck and wait for the head to snap back and then shoot.

The second boss is a lot like the first one except he shoots seed pods at you. You must shoot these down or they’ll hit you and knock you back. When you hit both, then repeat the basic steps: move into position, duck and wait, and then shoot. Splat this guy three times and move on to boss number three. 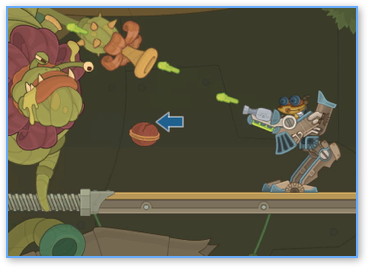 Shoot the seed pods that the second boss hurls at you.

The third and final boss is the toughest of all. By now you’ve got the basic rhythm down, but there’s an added complication. Not only does this guy shoot seed pods at you, but he’s protected by powerful bombs that hang on the ceiling above you. If you are hit by one, the explosion will knock you back very far. If you’re not careful, you could get knocked all the way down into the acid below. Ick!

It makes sense to hang back and wait for some of the bombs to drop before you move in for the kill. Once the way is clear, shoot the seed pods he sends at you, then get in and repeat the basic steps. Get into position so that his head starts to move, then duck. Next wait for his head to snap back and then shoot. Hit him three times and it’s all over. You’ll appear back inside the main chamber where the mayor will present you with the Steamworks Island medallion. 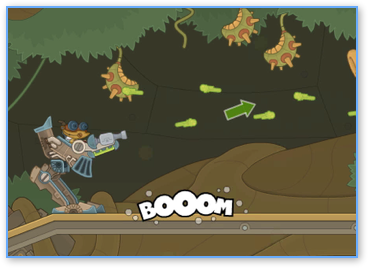 Watch out for these plant bombs that go boom!