Reality TV Island is the upcoming quest on Poptropica. It has been marked as coming soon for a very long time, but has been repeatedly delayed for several reasons. In the meantime, many advertising mini-missions and some short quests like Poptropica Haunted House have been released, but Reality TV Island remains a mystery.

Reality TV Island was originally going to be launched in the earlier part of 2009, and at some point it was slated to come after the release of Big Nate Island. It was originally announced in September, 2008 on the Poptropica Creator’s Blog. But the next quest after Big Nate was Astro-Knights Island and there hasn’t been much talk about Reality TV Island since, except for a follow-up blog post in February, 2009 that showed a picture of some possible contestants you would compete with.

Here is how the creators originally described Reality TV Island in the September 2008 blog post:

You’ll arrive in a town that’s obsessed with TV. Even the smallest apartment has a 56″ flat-screen television hanging on the wall.

You’ll get a chance to appear as a star on a reality TV show, on a faraway deserted island. You’ll have to battle it out with your tribe members, avoid elimination, and become a hero to all of the people in your home town!

In January, 2010, the Poptropica Creators began posting teasers for the upcoming island on the official Poptropica blog, just as they did a few weeks before with Counterfeit Island. The first two screenshots posted came from Hazmat Hermit and Comic Kid. They showed a scene from an event called the Leaky Jar Race and a giant fountain shaped as a fish. 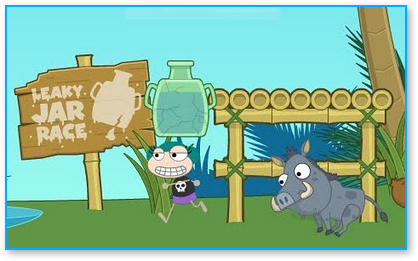 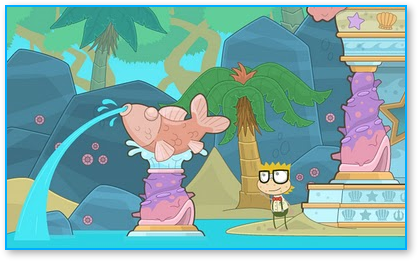