There’s a new costume in the store and it is a special limited edition item called the Light Ninja costume. It looks like the opposite of the Midnight Ninja costume that has been available in the store for a while, except it’s white and it’s only available for a limited time. It will only be available in the Poptropica store through August 23, 2009. The outfit costs 75 credits, so now is the time to finish up one of the Poptropica islands or to buy some credits.

Here’s a picture of me wearing the Light Ninja Costume and prowling around Spy Island. BTW, the special action for the costume, which you activate by pressing the space bar while wearing it, is spinning nunchucks. 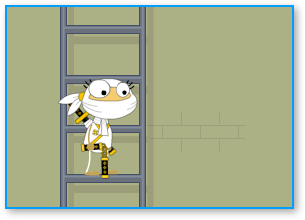