We’ve completed two rounds of voting and we’re now down to the Final Four in the Poptropica Island Smackdown, where you vote on which is the best Poptropica island of all time. The competition has been fierce over the past several weeks with several head-to-head votes. And now only four islands remain in the contest. Which one will triumph? Only time and your votes will decide. Here’s a quick look at the final four contestants. 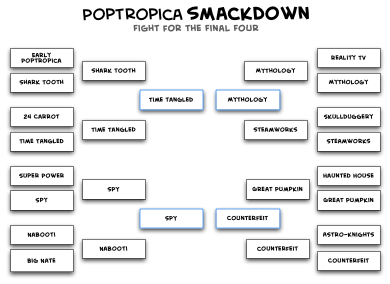 The path to the Final Four in the Poptropica Island Smackdown

This early favorite in Poptropica has you traveling back and forth through different eras in history to return artifacts to where they belong. To reach the Final Four, Time Tangled Island beat out 24 Carrot Island and Shark Tooth Island.

You’re a secret agent who must rescue fellow agents that have been captured by the notorious criminal organization, B.A.D. After rescuing the agents, you must put a stop to B.A.D.’s dastardly plot. Spy Island reached the Final Four by sneaking past Super Power Island and then Nabooti Island.

It’s an epic struggle with the Gods in this heroic quest to locate five sacred items that will determine the fate of all of Poptropica. You’ll mingle with many of the Greek gods and mythical creatures in this lengthy quest. Mythology Island stormed past Reality TV Island and then Steamworks Island to reach the Final Four.

A well-known art thief has made plans to steal a famous painting from the art museum, and it’s up to you to put a stop to this plot. There are many twists and turns in this mysterious quest, culminating in a tricky boss fight and a big surprise ending. Oh, and this is where we met Balloon Boy! Counterfeit Island had a tough road to the Final Four, beating out the very popular Astro-Knights Island and then the recent Great Pumpkin Island.

And there are the contestants. Voting will begin tomorrow with Time Tangled vs. Spy Island, followed by Mythology vs. Counterfeit. Then it’s on to the championship. Stay tuned!