Poptropica announced a new feature that a lot of us have been requesting: island restarts! If you’ve already played through an island and solved it, you can’t do it again. That is, until now! The new feature is available from the map screen while playing an island. It will restart everything so that you can play through the island again. You still get to keep your island medallion for solving it the first time. Even better, the island medallion icon on the stats screen will track the number of times you’ve completed the island. So let’s see who can complete Early Poptropica 100 times!

What do you think of this new feature on Poptropica? Post your thoughts in the comments section below or join the discussions in the Poptropica Secrets forum. 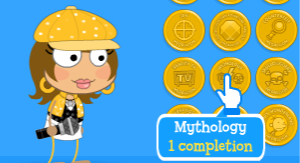 Hover over the island medallions on your stats screen to see how many times you've completed each island.