It’s starting to look a little bit like Halloween on Poptropica. When you go to the game, you’ll see a promotion for something called the Haunted House. There’s not a lot of information about it, but it looks like it will be a mini-mission just for Halloween. It’s coming soon!

There are also some new Halloween costumes in the store. They are:

Of course don’t forget the special Poptropica cheat where you can get a pumpkin head at any time by pressing CTRL+SHIFT+P on your keyboard, or CMD+SHIFT+P on a Mac.

A lot of Poptropica costumes are showing up in Multiverse rooms. For a brief period of time, you’ll see a costume dummy show up with a costume. You can use the costumizer power to copy it to your character. This is a little like last year when they put Halloween costumes in some of the islands, like this one in Superpower Island: 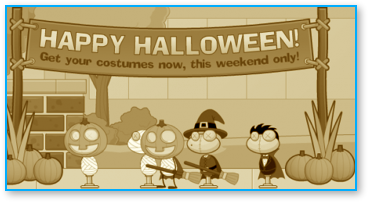