You can get them in green, purple and red and they all give you a fun and foolish kind of look. Expect to see them popping up in the multiplayer rooms like crazy.

Fun fact: this is not the first time that fake nose and glasses have been available in Poptropica. For a very brief time, there was a pair of black glasses available in the sewers of Super Power Island. These were called the Goofy Glasses and they’re one of the 20 rarest items in Poptropica.

Another old favorite from the Store is being highlighted. It’s the April Fool’s outfit, which gives you a funny hat, bow-tie and a spritzer bottle that sprays when you press the space bar. 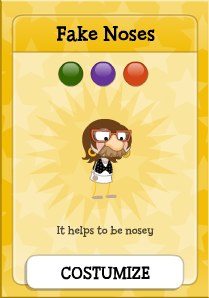 The Poptropica Fake Noses card in the Store