Poptropica completely changed its home page today with the launch of Daily Pop. As many of you guessed, Daily Pop is a collection of comic strips that you can read each day on the Web, along with some simple Flash games from Miniclip.com and sneak peeks from upcoming islands. In addition to the release of Daily Pop, the opening screen of Poptropica is different and has a lot of features and highlights from the game, especially for items you can buy in the store.

The comics currently featured in the Daily Pop section are: Peanuts, Over the Hedge, Big Nate, Rose is Rose, Grand Avenue, Soup to Nutz, Nancy, Frazz, and Meg! It looks like they have room for lots more. When you choose a comic, you get several different comic strips to read. I think you get about a week’s worth. So maybe they should have called it Weekly Pop. You can rate each comic collection with stars in the upper-right corner.

The mini-games that you can play are UFO Joe, Canyon Defense, Candy & Clyde, Smashing, Sleigh Shot, Snowline 2, Crash Down, and Balance. A nice thing about each game is that whoever gets the highest score for each day, week and month is featured on the left side of the game screen. For some of the games, like Sleigh Shot, it’s hard to figure out how your success in the game translates to the score on the left. 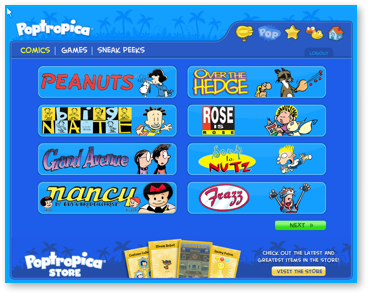 I’m not sure what I think of Daily Pop. I like the mini-games, but I could play those anyway on MiniClip. The comics are ok, but they’re so small that they can be difficult to read. It definitely gives you more things to do while you’re waiting for new islands to arrive in Poptropica. What do you think of Daily Pop? Sound off in the comments section below.