Using the Costumizer in Poptropica

One of the coolest tools in Poptropica is the Costumizer. It’s really simple to use but many people don’t even know it’s there. What does the costumizer do? It lets you instantly wear any costume you see another character wearing in game. In just seconds, you can wear just about any outfit you want in Poptropica! 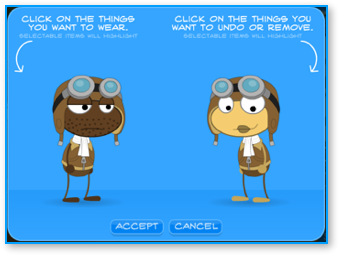 The best part is that you can wear any outfit worn by another character in Poptropica. It’s really cool to wear the costumes that you see other special or rare characters have, like Mordred from Astro-Knights or Betty Jetty from Superpower Island. If you’re feeling really creative, you can come up with some great combinations that no one has seen before.

If you have credits from finishing the islands or you have bought some, you can use these in the store to buy costumes there and then combine them with ones you find on other characters in the game.