There’s a new advertisement mission in Poptropica. You can find it on Main Street on most of the islands. It’s an advertisement mission for Apple Jacks cereal. The mission is pretty simple. You must go inside the building and get your assignment from two guys inside named Apple and CinnaMon. The CinnaMon dude is a tall stick of cinnamon with dreadlocks and a rasta cap. Who thinks this stuff up? 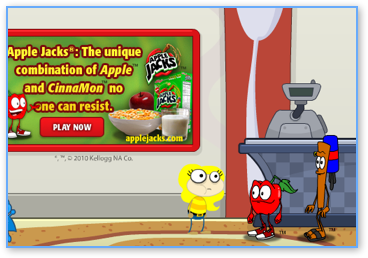 Hanging out with Apple and CinnaMon.

OK, so they’ll tell you that someone has set up some contraptions inside the grocery store. You need to get inside, avoid the obstacles, and turn off all the machines. It’s pretty easy to do: just jump up and over them by using the shelves. An even easier way to do this is on Early Poptropica or Super Power Island. If you have finished either of those islands and have the Jetpack or the Flight Power, you can just fly up in the air over everything and drop down at the end.

At the end, you get a special follower as a prize. It’s a little miniature Apple dude. I was kind of hoping to get rasta CinnaMon as a follower! Check out the video walkthrough, which shows you two ways to finish this mission.