Poptrop-trivia: the Minotaur of Mythology Island

Poptrop-trivia is another fun new feature here on Poptropica Secrets.  Every week, we’ll be giving you some quirky facts or stories inspired by the amazing islands of Poptropica.  This week’s Poptrop-trivia spotlights a monster from Mythology Island!

Did you know…in Greek mythology the minotaur’s name was Asterion?  Every year King Minos captured prisoners from the surrounding islands and let them loose in the maze known as the Labyrinth where the half-man, half-bull Asterion would gobble them up.  Possibly with a side of Fries.  The hero Theseus pretended to be one of these sacrifices so he could get into the maze to kill the beast.  As you know from Poptropica, the best way to get through a maze is with a ball of string trailing behind.  The king’s daughter, Ariadne, gave Theseus his string so he could retrace his steps after he killed the minotaur.  And every one lived happily ever after.  Well…except for Asterion.  But that’s what he gets for being an evil, carnivorous man-bull. 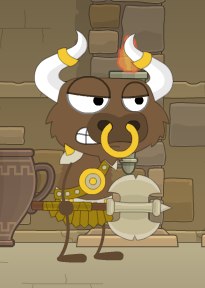 I wonder if Theseus put his head above his fireplace?