The pirate island now has an official name. It’s Skullduggery Island and it will be available in Early Access mode this May!

The Poptropica Creators are busy working on yet another new island quest. With the public release of Mythology Island less than two weeks away, the creators posted a sneak peek screenshot to the Poptropica blog and Facebook Fan page. It shows some characters dressed in pirate and soldier gear. There’s also a clue with the caption they left:

Ahoy! What “arr” the Poptropica Creators up to this time?

CoderKid over at the PHB thinks the official name of the island will be Pirate Trade Island. That name sounds kind of goofy, but CoderKid usually knows his stuff. We’ll have to wait and see for now, but no matter what the final name of the island is, there will definitely be pirates. Yay!

Want to get an early start on celebrating the new island release? Don’t forget there’s a pirate captain outfit available in the Poptropica store. It costs 75 credits and is free for paid members. 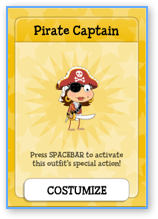 Arrr. Poptropica be for pirates!