Poptropica has a brand new advertisement building up. It’s promoting the DVD for the Percy Jackson and the Olympians movie, which is coming out on June 29. You’ll find the building on Main Street on most of the islands as long as your Poptropican meets the age requirements for the ad. It’s a pretty easy quest and there are some really nice rewards.

Don't forget you can costumize Percy, shaggy hair and all.

Head to Main Street on just about any island in Poptropica and go talk to the guy outside the ad building. Then go inside and you’ll meet Percy Jackson. Hey dude! He’ll tell you he needs help finding three items for Zeus, but that the Medusa is causing problems. Go inside the building and you’ll have 30 seconds to find the items. Along the way, you need to watch out for the Medusa. She’ll appear out of nowhere and if you get caught in her gaze, you’ll be turned to stone. Not good! 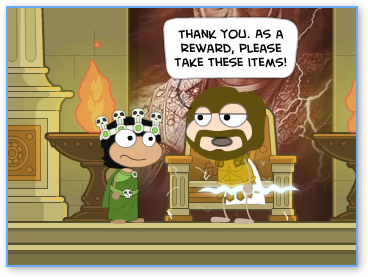 Zeus is looking a lot younger than in Mythology Island

You’ll probably notice that this version of Zeus is way younger than the one from Mythology Island. At first when I saw him I did a double-take. I guess in the movie he’s pretty young, but I skipped that one. I read the book but heard the movie was terrible. 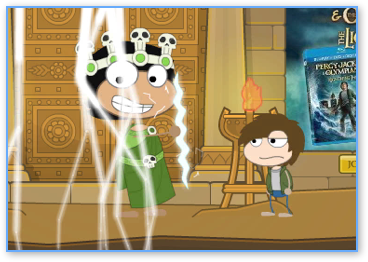