Hercules, who was actually known as Heracles to the Greeks (Hercules is his Roman name) was one of the most powerful and beloved of all the Greek Heroes. He was born the son of Zeus and a mortal woman, and early on showed his strength and survival skills. When he was only a few months old, a jealous Hera sent two serpents to his crib to slay him. But he was later found with both the snakes crushed in his hands and was playing with them as though they were toys.

Hercules is most famous for his twelve labors, which were given to him by his arch-enemy King Eurystheus. He was originally given ten labors, but then had to complete two more after the King deemed that two of them were not completed correctly. Among the labors were destroying the Hydra, capturing Cerberus, and capturing the Cretan Bull. 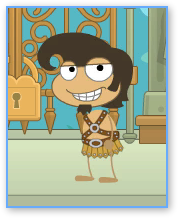 Hercules is a popular and strong hero.

In Poptropica, Hercules has already achieved his great fame and you must lure him out of his cafe, where he is busy signing autographs. He won’t help you out until after you’ve completed your mission for Zeus and you’ll need to have Aprodite’s mirror before you can convince him to join you. Hercules will assist you with his strength by moving the obstacles that prevent you from getting inside the Underworld and Poseidon’s realm. Finally, Hercules will open the gate to Mount Olympus, where you’ll battle Zeus to save all of Poptropica.

In Greek Mythology, Hercules is granted immortality for his heroics and becomes a God, joining the Olympians as the greatest hero of all time. In Poptropica, he has a less fortunate fate. He gains immortality as a statue, turned to stone by the evil Medusa! 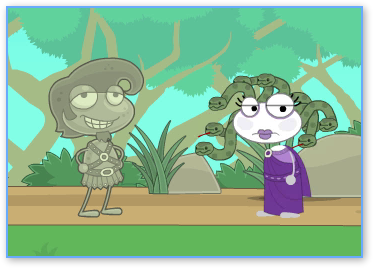 Hercules turned to stone by the Medusa, but not before he strikes a pose.