There’s less than a week to go before Poptropica Mythology Island becomes playable for everyone (right now, only paid members can play). To celebrate the upcoming public launch, we’re doing spotlights on some of the characters you’ll meet on Mythology Island.

Hades, God of the Dead and ruler of the underworld, was one of the most feared gods in all of Greek Mythology. In fact, the Greeks were so afraid of him that they refused to call him by name. Instead, most Greeks just referred to him as Pluto. He is the brother of Zeus and Poseidon and when they conquered the Titans, the three brothers divided the world between them. Hades must have gotten the shortest straw. 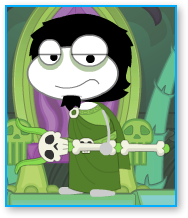 Hades after giving up his crown in Poptropica

In Poptropica, you’ll encounter Hades when you visit his realm to get his help in stopping Zeus from taking over all of Poptropica. Before you can get into Hades’ throne room, you’ll need to finish your quest to find five items. Part of that quest will take you into the underworld realm. One of the tasks will be to get a whisker from Cerberus, who is the guardian of the underworld. Later, Hercules will help you get inside the throne room of Hades, where you will meet him and enlist his help. Hades will give you his crown to help you in your fight against Zeus.

In Greek Mythology, the crown of Hades was very powerful. It was crafted by the Cyclopes, the powerful one-eyed creatures who were born to Gaia and Uranus. Yeah, I said Uranus. Go ahead and snicker. Anyway, the crown (sometimes it’s called a helmet) was used by Perseus to help him defeat the Medusa. You’ll use the crown to help make you powerful enough to face Zeus in the final battle at the top of Mount Olympus.

There’s another important reference to the mythology of Hades in this quest. When you first travel to the underworld, you’ll need to place a pomegranate on Hades’ altar as an offering to get inside. This is a reference to the legend of Persephone, who Hades kidnapped and brought to the underworld to be his wife. She was freed by Zeus, but before she left he gave her a pomegranate which she ate. This bound her to stay in the underworld for part of each year. The legend is that this is the winter-time and her absence from Earth is why nothing grows during the winter.