Home | Poptropica | Mysteries of the Construction Guy and Balloon Boy

Mysteries of the Construction Guy and Balloon Boy

Update: OK, thank you to everyone in the comments who points out that Construction Guy does appear in Counterfeit Island. He’s blocks the way to certain parts of the island when night comes. I must have missed him. And there’s one new update to Balloon Boy. You can see him in the background when you’re on the Scooter chase sequence (see the screenshot below). Go, Balloon Boy, go!

A lot of people are writing comments asking what happened to the Construction Guy in Counterfeit Island. If you remember back in November, the creators posted some sneak peek screenshots of characters we would meet in Counterfeit Island. The first turned out to be the security guard up in the museum security office. The third is the woman who leads the tour of the underground tunnels. But the guy in the middle, who is wearing coveralls and a construction helmet, doesn’t seem to appear anywhere on the island. Did we miss him or did he get dropped from the island before it was released? Have you seen him on Counterfeit Island? If so, post in the comments!

Many people are also asking what happens to Balloon Boy. When you give him a green balloon, he takes off in the air. If you don’t have access to Counterfeit Island yet, you can see him at about one minute into Part 1 of my Counterfeit Island Walkthrough video. This is a joke by the Poptropica Creators that references the big Balloon Boy hoax from October when everyone thought a young boy from Colorado was trapped inside a giant weather balloon that had taken off from his parent’s backyard. In Counterfeit Island’s joke version, we see little Balloon Boy fly off into the air but never return. You can watch the TV in the Web Cafe and see scenes of him flying away. But what will happen to poor little Balloon Boy in Poptropica? Will we ever see him again? We need answers! 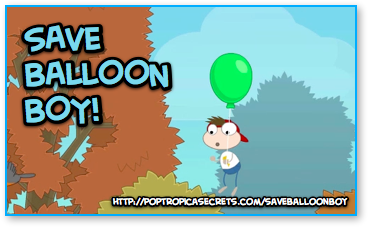 Save Balloon Boy! We need to know he is safe! 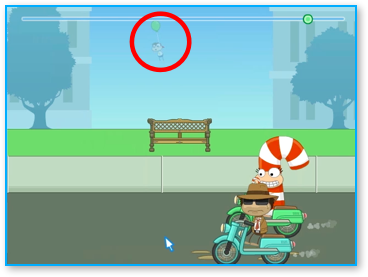