The creators of Poptropica are teasing us some more with bits and pieces of the upcoming Counterfeit Island. There are two more posts with screenshots from the island. The first is by Binary Bard and features a picture of the Bard standing in front of a painting by Edvard Munch called, The Scream. In the caption he speaks in binary code and I don’t know what he’s saying. 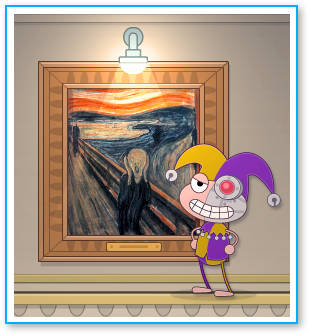 Binary Bard standing in front of a painting

Today there is a new post from Comic Kid and he’s standing in front of a cottage in the woods. Here’s what he says:

While exploring more of Counterfeit Island, I saw a quaint little cottage just outside of town, that would be a great vacationing spot.

All this activity about Counterfeit Island makes me think that the new island will be coming out very, very soon but we still don’t have a date. Hurry up, Poptropica!