Knockout is a new competition for Reality TV Island. It was added when the island left early access mode and became available for everyone to play. In this challenge, the goal is to have the largest amount of plate left at the end of three rounds of competition. During each round, each contestant gets to use a slingshot to try and break any opponent’s plate.

The plates are arranged in two rows, a top row and a bottom row. When it’s your turn to shoot, you need to line up your slingshot and then pull it back with the cursor and then release to fire the shot. The amount you want to pull back depends on whether you’re aiming for the top or bottom row. See the screenshots for a guide on how far to pull back the slingshot for each row. Even with the guides, it might take a little practice to get things right. 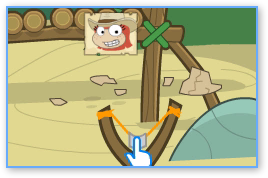 Pull this far back to hit the top row plates in Knockout. 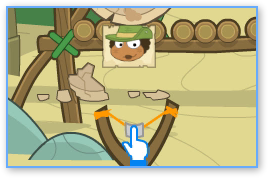 Pull this far back to hit the bottom row of plates.

Once you’ve got your aim down, the basic strategy is pretty easy. First, always aim for whichever opponent’s plate has the most remaining. On your first shot, this will be everyone, so just pick any plate you like. Usually, it’s best to line up the slingshot with the center of the plate, unless that plate has already had its center knocked out. In that case, line up a little to the left or right of the center (or pick a different opponent’s plate).