We’re almost through the first round of the Poptropica Island Smackdown, where once and for all we’ll settle the question of which island is the best in all of Poptropica (well, at least until they release the new one!) The competition has been fierce so far, with clear winners in each of the contests. Here’s a chart that shows all the first round competition leading up to the “Final Four.” 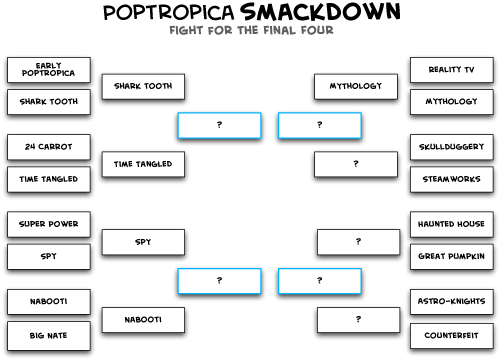 Here's the standings after several competitions in the first round of the Smackdown.

The next competition is between two favorites from last year: Astro-Knights Island and Counterfeit Island. Astro-Knights hit the scene in the summer of 2009 and was one of the most imaginative (and long!) quests released. Counterfeit Island came out in December of 2009. There was very little fanfare leading up to the release and most of us were expecting Reality TV Island. But this was a pleasant surprise. Counterfeit Island was shrouded in mystery and full of exciting twists and turns. Both of these quests featured very tough boss fights at the end.

But which one was better? It’s your turn to decide. Read the summaries and then vote below to determine which one will survive to the next round.

Astro-Knights arrived in the late Spring of 2009 and was at the time by far the most ambitious and complex Poptropica Island. It brought together a Medieval knights of the round table setting with futuristic space travel. In this quest, you need to rescue the Princess, who has been kidnapped by Mordred, also known as the Binary Bard. During the quest, you travel to different planets to rescue the other knights who attempted to rescue her but failed. Finally, you take on Mordred himself in one of the toughest boss fights in the game. Astro-Knights is a difficult and challenging island but very fun to play.

Counterfeit Island arrived in December of 2009 after a series of sneak peeks were posted on the official Poptropica blog featuring Comic Kid exploring the new island. In this mysterious quest, you need to find out who’s behind a plot to steal some of the world’s most valuable art. There are many twists and turns and huge surprises in this island. You never really know who to trust or what’s going on! Counterfeit Island featured a very fun chase sequence riding aboard scooters, an extremely cool part where you had to travel to another island on Poptropica as part of the story, and a big surprise at the end when the identity of the villain was revealed. It also featured one of the more difficult boss fights in the game. For sheer surprises and fun, Counterfeit Island scores big!

As exciting as both Astro-Knights and Counterfeit Island are, only one can advance to the next round in the Poptropica Island Smackdown. Which one do you think it should be? Vote below to send one island to the next competition and the other one packing. Vote now because this poll will close soon!