Gretchen Grimlock and Sir Gawain Go on a Valentine’s Date

The second Valentines for Villains date happened on Monday night, on the eve of Valentine’s Day. We all voted to see who should accompany super-villain Gretchen Grimlock (your arch-nemesis from Cryptids Island) on a date and where they should go. You voted and decided that the lucky guy would be Sir Gawain from Astro-Knights Island and that they would be enjoying a casual meal at the 24 Carrot Diner. Here’s how everything went down. 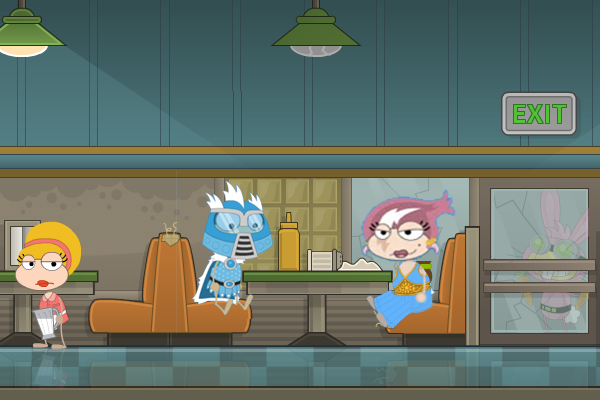 Gretchen Grimlock and Sir Gawain on their Valentine's Date at the Carrot King Diner. Who's that outside?

Gretchen Grimlock is a weathly adventurer and businesswoman and has a lot of resources at her disposal, including top-notch fashion designers. We asked the Poptropica Secrets community to make some suggestions as well, and there were plenty. Some of the best suggestions were to find an outfit that allowed her to show off her rather striking hairdo, a perfect Valentine’s pink and white display. In the end, she decided to take that advice and go with a blue gown. It also complimented Sir Gawain’s regal blue armor.

How It Went Down

Sir Gawain had to travel quite a bit from the planet Arturus to the Poptropica planet. Fortunately, he traveled by spaceship (a custom ride he had build on Pewter Moon). He landed outside the mansion belonging to Harold Mews, where Gretchen was waiting. They then took off together for a quick flight to 24 Carrot Island. Upon arrival, they were greeted by the Mayor, who has been busy trying to drum up tourism for the island ever since Dr. Hare was defeated and the carrots stopped disappearing. He was thrilled to have two celebrities visit the local diner for such a highly publicized date.

Gretchen and Sir Gawain settled into a cozy booth along the wall and were served a nice meal by the waitress. They enjoyed some carrot and coriander soup served with a side of baked baby carrots. For dessert, you guessed it–carrot cake. They enjoyed deep conversation and seemed to hit it off very well. There was only one minor setback–a stranger kept peering into the window of the diner trying to get their attention. The local police investigated and chased off the intruder. Following dinner, they each grabbed some carrot smoothies and headed off in Sir Gawain’s spaceship to visit the recently vacated beach hut on Shark Tooth Island. While there, they built a campfire and enjoyed a relaxing evening together under the stars.

It was a hit! Looks like love is in the air over Booga Bay. Next up: the Binary Bard’s date with Black Widow. Can two of the most devious super-villains in Poptropica hit it off? We’ll find out soon!