Almost everyone has heard of Captain Hook. He’s the fearsome pirate in the story of Peter Pan, and he’s Peter’s arch-nemesis. He gets his name from the hook that replaced his right hand, which was cut off by Peter Pan during one of their many sword fights. Hook’s hand was eaten by a crocodile, and the hungry croc pursues Captain Hook wherever he goes, hoping to get more of a taste. Fortunately for Captain Hook, the crocodile also swallowed a clock, so the Captain can always hear the crocodile approaching.

In the story of Peter Pan, Captain Hook is introduced as one of Blackbeard’s crew, and is described as the only man that Long John Silver ever feared. In the story of Peter Pan, Hook captures Wendy Darling, a girl who falls in love with Peter. When Peter comes to rescue Wendy, he and Captain Hook engage in a duel on board Hook’s ship. Peter beats Captain Hook and knocks him off the ship, where he is eaten by the crocodile that has been following him all this time.

The character of Captain Hook is so popular that he has appeared in many stories, plays and movies about Peter Pan, including sequels to the original story that are just about him, such as the 1991 movie called Hook, which starred Dustin Hoffman as the Captain and Robin Williams as a grown-up Peter Pan. 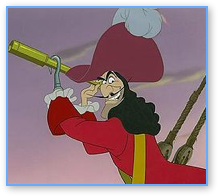 Captain Hook from the Disney version of Peter Pan

The most famous version of Captain Hook is the cartoon adaptation from the 1953 Disney movie, Peter Pan.