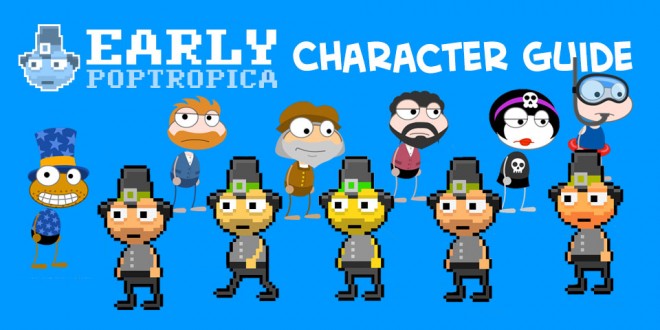 We spend so much time running around the different islands of Poptropica trying to solve quests that sometimes we fail to appreciate the many Poptropicans that we encounter along the way. Some islands are nearly empty (Survival Island, for example), but others are teeming with busy Poptropicans going about their business. With that in mind, welcome to part one of a series of posts with a more in-depth look at all the Poptropicans you’ll meet as you go about completing the islands and earning your medallions.

We start with Early Poptropica, which is of course the very first island in the game (well, at least on the original Web version!) If you follow the complete Early Poptropica Walkthrough, you’ll traverse roughly nine different zones in the game, covering Main Street and Poptropica Towers, the Giant’s cloud kingdom, some really dark sewers under the street, and of course Early Poptropica itself. The latter is populated by 8-bit pixelated early settlers of the town.

Of course, nearly every island starts on Main Street and in Early Poptropica, there are random characters here who change in appearance each time you enter the zone. For that reason, I haven’t “named” any of them, and they can have lots of different combinations. It’s a great place to visit if you want to use the Costumizer feature to outfit your own avatar with some pretty cool stuff. Just keep returning to the zone and you’ll meet all kinds of interesting Poptropicans.

This is the first original Poptropica citizen you meet in the Early Poptropica zone.

Now on to Early Poptropica itself (the Zone). Here you’ll meet five different citizens of Early Poptropica. They don’t have official names, so I’ll just refer to them as Greeter, Greeter Two, Pig Keeper, Well Guy and Flag Guy. Hey, not the most inventive names, but they work.

The two greeters are just there to introduce you to the game and your main quest to retrieve the missing items.

Pig Keeper, Well Guy and Flag Guy are quest-givers. When you find the pig, the bucket and the flag, you return them to each of these guys. Once you do, you’ll earn your island medallion.

Have you ever wondered why these guys are pixelated? It’s sort of a throw-back to the old “early” days of computer gaming when graphics were blocky 8-bit images–a far cry from the fancy and crisp vector images we see today. BTW, great trivia question: do you know when Early Poptropica was founded? You’ll find it right on the sign in this zone.

Surprisingly, there aren’t many other Poptropicans to meet in the other zones, but they are some interesting characters! If you go inside the Pop Art Museum on Main Street, you’ll get to meet three famous artists: Leonardo da Vinci, Vincent Van Gogh, and Georges Pierre Seurat. Head over to Poptropica Towers, and you’ll find the Pigment Salesman. Click on him to have the option to change the skin color of your Poptropica avatar. Finally, head down below the street into the sewers, where you’ll find two odd characters: a “Goth” girl and a very out-of-place snorkler boy holding a glow stick. What’s their story, I wonder?