There are two new clues about the upcoming island in Poptropica. This isn’t about Great Pumpkin Island, the special Halloween mini-quest that’s coming for the holidays, but for a new main island quest that the Creators have been talking about for a few weeks. We’ve code-named it Dinosaur Island until we learn more. Poptropica hasn’t said it will feature dinosaurs, but we’re really hoping it will. 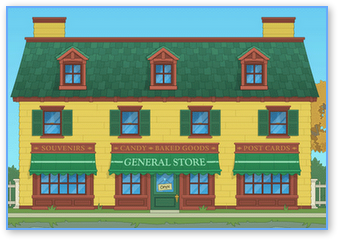 The outside of a General Store in Poptropica's upcoming island.

This week the Creators gave us two new screenshots. One is of the exterior of a General Store and the second is the interior of a mansion. Inside the mansion is an ornate round window with a stuffed Dodo bird sitting on the window sill. At least it sure looks like a Dodo. The creators don’t say for sure, instead asking the question, “What kind of bird is that, anyway?”

If you’re not familiar with the Dodo, it was a small flightless bird that went extinct in the mid-1600s. It was a very tasty bird to eat and since it couldn’t fly, it was easy to catch. It’s one of the first known examples of humans causing another species to go extinct.

I think this is also a clue for the island. The person living in the mansion must definitely be concerned with extinct animals. Hmmm, what other kinds of species are extinct? Oh, I don’t know…maybe dinosaurs?