The first Valentine’s for Villains date took place this Saturday afternoon, a few days ahead of Valentine’s Day. Last week, we kicked off the Valentines for Villains event with a vote to see who Director D should take on his date and where they should go. You chose Betty Jetty as his date and the rooftop restaurant in Early Poptropica as the scene. So, we arranged for them to meet, and here’s how it unfolded… 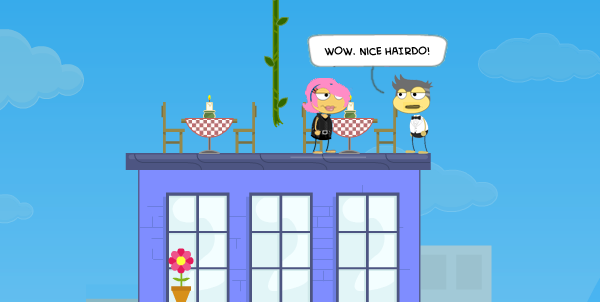 Director D has always had a fascination with hair.

We all knew that Director D would be wearing his trademark white tuxedo jacket and of course, his toupee. Betty wasn’t about to show up in her prison-issue garb, so she did some shopping and decided to opt for a contemporary black outfit that she had spotted while flying over Cryptids Island. It’s the outfit worn by the very fashionable woman on Main Street (the one with the dark sunglasses). The big surprise was her hair. Although Betty is known for her spiky pink hair, she decided to go a little more conventional–and elegant–for her date with the big D.

How It Went Down

The date got off to an awkward start, as Director D seemed uncomfortable and unable to discuss anything but Betty Jetty’s hair. But the food soon arrived–a selection of over-sized vegetables grown in the giant’s garden up in the clouds. Once they began to eat, the conversation turned to common interests, such as world domination and the best way to manage a super-villain organization.

Betty Jetty and Director D discovered they had a lot in common and the conversation went on for several hours until the sun began to set and the fog started to roll in. Unfortunately, the wind started picking up as well, and this is where we miscalculated. A particularly strong gust swept across the rooftops, knocking Director D’s toupee clean off. Despite Betty Jetty’s reassurances that Director D was just as handsome bald as with hair, he became flustered and insisted on descending to the streets below to retrieve it.

The date ended as awkwardly as it began, but clearly Betty Jetty and Director D enjoyed themselves. So, fellow Cupids, it was a success! Hopefully we’ll have another one when the second Valentines for Villains date happens tomorrow. Stay tuned!