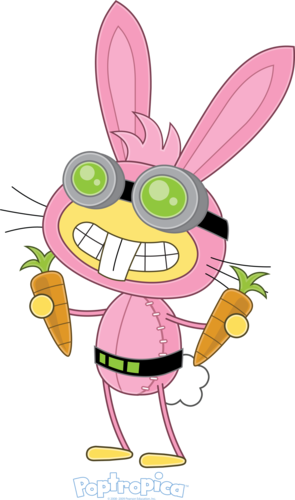 Dr. Hare is a villain in Poptropica. His most notable appearance is as the evil mastermind in Poptropica’s 24-Carrot Island. He also appeared as one of the contestants on Reality TV Island. Dr. Hare can be seen in a pink rabbit suit, complete with whiskers, green goggles and a black and green belt. He also has prominent buck teeth to complete the look.

In 24 Carrot Island, Dr. Hare is behind a plot to steal the town’s carrots, which is their primary source of income. He kidnapped four citizens of the island, and then turned them into his workers using his special Drone Ears invention. In this quest, Poptropica players must infiltrate Dr. Hare’s factory, rescue the kidnapped workers and ultimately put a stop to Dr. Hare’s evil plans to launch a robot into space and control the minds of everyone on the planet.

In Dr. Hare’s Secret Lab, a special mini-quest that was released by Poptropica, players must try to steal the Rabbot suit that Dr. Hare has created. The mini-quest is very similar to an advertisement quest released earlier by Poptropica for the movie, Race to Witch Mountain. Although the lab belongs to Dr. Hare, he does not appear in the mini-quest. 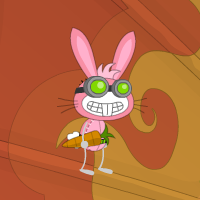 In 2011, Poptropica released several toys that were available through Toys R Us. Two of the toys were the Dr. Hare Plush and the Dr. Hare Action Figure. Both toys came with special codes that unlocked items in-game. The plush toy got you a special Dr. Hare power and a mini-plush that your Poptropican could carry around. The action figure unlocked a complete Dr. Hare costume that you could wear.

Where is Dr. Hare?

In the summer of 2011, the Poptropica Creators started posting pictures of Dr. Hare appearing in various locations around the globe and asking readers to guess where he was. He turned up in several places, including Australia, Utah, London, and Maine. Here on PoptropicaSecrets.com, we created a game called, Where in Poptropica is Dr. Hare, which included several screenshots of Dr. Hare hiding out in different locations in Poptropica. Play the game to see if you can guess where he is!