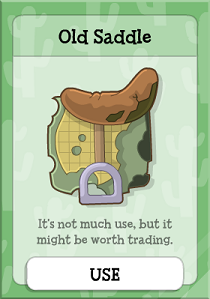 Use the Old Saddle to trade it for a Oil Can or Golden Pan in the Rock Ridge trading post. It doesn’t actually have any use in the island, but it’s worth trading for such items that are usable.

How to Get the Old Saddle

On the Rock Ridge, talk to the guy with the cows. He’ll tell you that he needs you to find and catch his calf. He’ll give you a lasso to help. Leave town and follow the trail of horseshoe marks. You’ll see the calf shortly. Now chase after him and lasso him when you can. This is just like the sneak preview round ‘em up game. Press the space bar once to start twirling the lasso and then press it again to release. Once you catch the calf, lead him to the ranch (it’s on your map) and then return to the guy in Rock Ridge. He’ll give you an old saddle as a reward. 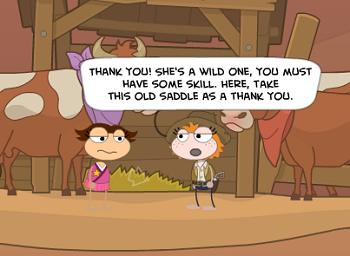