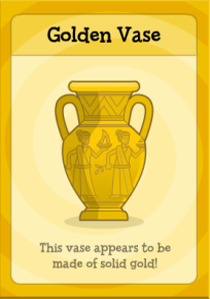 The Golden Vase is one of the missing items that you need to recover and return to the correct time period. This Golden Vase must be return in the time of Ancient Greece (1 o’clock, 328 BC in your Time Device), give it to the oracle on the Hill.

How to Get the Golden Vase

You will need the barrel of gunpowder from the Great Wall of China (6 o’clock, 1593 AD), which is where you’d be going for the Thor Amulet as well. Both are on the right side of the Wall. Bring the gunpowder to the rocked-up cave on the hill at the Viking island. It will blast the rocks away and you can enter the cave.

Unfortunately, you have only a torch to light your way and it is rapidly burning out. You have about 30 seconds to reach the hidden vase, and there are pools of water that will also put out the torch. You must run down, up, up, up, across, down and left, jumping three pools of water at the end. After you have the vase, you can easily leave using the time device. 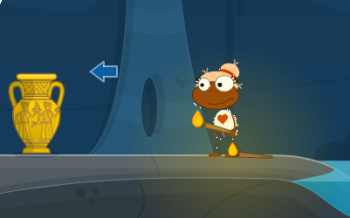