In Blimp Adventure, there is trouble in the skies over Poptropica! A dastardly villain, Dr. Cumulo Nimbus, is using his flying weather-machine to blast lightning bolts at the islands below, setting them on fire! Put out the fires using the water bucket attached to your blimp and save the day! The game is similar in concept to the boss fight at the end of Red Dragon Island, where you had to stop the Red Dragon from using its fire breath to burn down the village.

Blimp Adventure is a special mini-game that you gain access to when you purchase the Poptropica Inflatable Blimp Toy. When you enter the code that appears on the green coin that comes with your toy, you’ll get the Blimp Adventure gold card in your backpack inventory and can play the game using the card.

Move the blimp with your mouse, and click your mouse button to pour water onto a burning building. Refill your bucket by dunking it in the water below. The red meters above the buildings show the amount of damage. The meter will disappear when the fire is put out. If the meter gets filled completely that building will be destroyed. You lose the game if too many buildings are destroyed. If you lose, you have the option to play the level over using easy mode, where your water lasts longer.

Once you put out all the fires, the level is complete. Dr. Cumulo Nimbus will appear and taunt you before moving onto the next level. As you progress through each level, they get harder and Dr. Cumulo Nimbus introduces new weapons that make it harder to navigate your blimp and put out the fires. 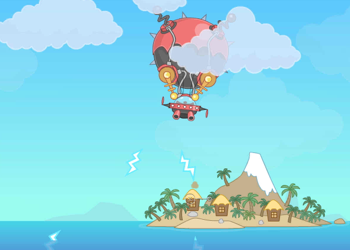 This is a very basic level where you learn how to play the game. All you need to do here is drop the water on the fires. Refill by dunking the bucket back into the ocean and then return to putting out the fires once your water level (the blue bar in the top-right corner) is full. There are three islands with huts on fire. The first two only have one building each and the third island has three. 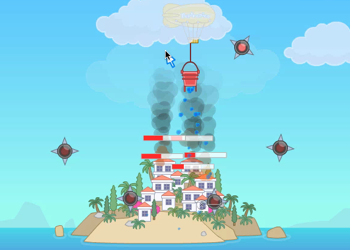 In the second level of Blimp Adventure, you have to watch out for the floating air mines above the island.

In the second level, things get a little tougher. Dr. Cumulo Nimbus deploys air mines. These are floating mines that damage your blimp if you hit them. They’re only dangerous when armed, which is when the red lights on them are lit. All of the fires are on one island and they’re closely grouped together. So it’s fairly easy to put out all the fires as long as you successfully avoid touching the five mines that he places above the island. 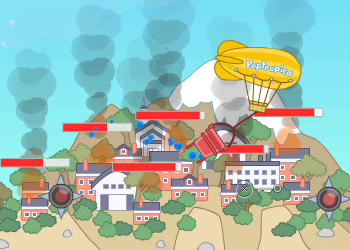 There are a lot of buildings on fire in the main island on level 3 of Blimp Adventure.

Once you advance to the third level, you’ll find that Dr. Nimbus has a nastier kind of mine that he will use to try and stop you. These are the lightning mines, which are blue. When lit, they will shoot lightning bolts at you that damage your ship. You’ll get attacked if you get close enough to the mine–they can attack without you touching them, making them much more dangerous than the normal air mines you encountered in the previous level. In this island, there is a small fire on the lighthouse at the beginning and several large fires burning in the town to the right. It’s easiest to take care of the lighthouse fire first and then move to the big island, but if you don’t move quickly enough, you’ll probably lose some of the buildings.

In this level, you’ll need to put out a series of fires that are burning a large castle on a single island. The good news is that there’s only one area to focus on, meaning that you don’t have to fly back and forth between fires. The bad news is that in this level, you’ll encounter smart mines along with the other mines from the earlier levels. These new mines have yellow lights and they will follow you around, so you can’t stay in one place for too long. Fortunately, they don’t move very fast. You can “shake off” the mines for a while by flying off to the side and letting them follow you, and then return to putting out the fire.

In this final level, instead of putting out fires, you’ll pick up snowballs at the bottom of the screen and then drop them on top of Dr. Cumulo Nimbus’ fortress. In addition to mines, there are ice cannons that will aim at your balloon and shoot at you. If you get hit, you’ll take damage and you’ll drop the snowball if you were carrying one. While avoiding the mines and cannons, pick up the snowballs and then carry them above the fortress in the middle. Once in position, drop the snowball and you will damage the fortress. Do this enough times and you’ll win the level–and the game. Remember that once you pick up a snowball, you have to keep the mouse button pressed to carry it. Release the mouse button to drop the snowball once you’re in position.